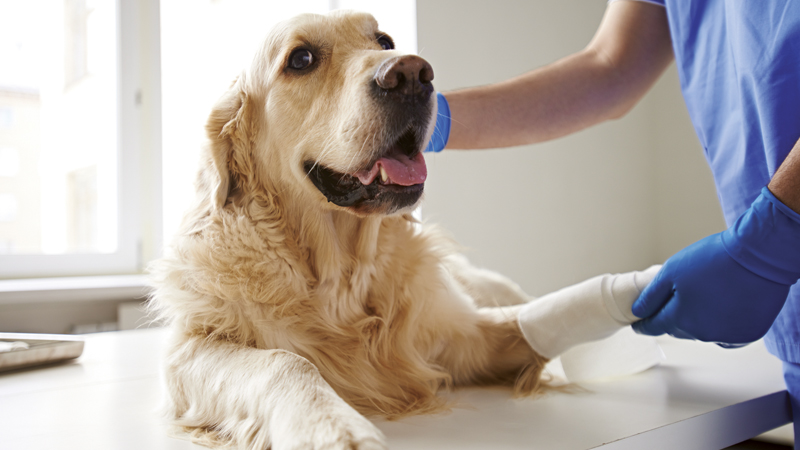 Mercersburg Veterinary Clinic employs stem cell therapy to treat a litany of ailments in their patients with promising results.

Steve Layton began noticing that his 5-year-old golden retriever, Nittany, was licking her back paws excessively — to the point it was creating sores. “We thought something was irritating her feet,” Steve says, so they took her to the vet.

Dr. Roger Horst of the Mercersburg Veterinary Clinic in Mercersburg examined Nittany and told Steve that she was likely experiencing pain. An X-ray of Nittany’s pelvic area revealed dysplasia in both hip joints. While traditional treatment might mean pain medication, joint supplements, or laser therapy, Dr. Horst had another recommendation: stem cell therapy.

“Nittany is a good candidate for stem cell therapy, since she’s only 5,” says Dr. Horst, while supervising two veterinary technicians administering anesthesia to the large golden prior to her procedure. “She has two bad hips and hip dysplasia can lead to arthritis. So we do the stem cell therapy now, and she should have a few good years where she’s not bothered by pain.” 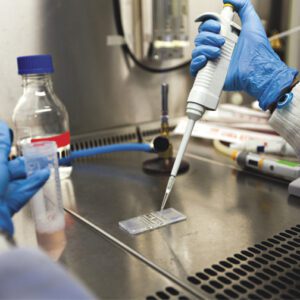 According to Dr. Horst, stem cells in humans and in animals are like “blank slate repair cells” that are used by the body to repair it. When an injury occurs, the body sends stem cells through the blood to the injured or damaged area. Once they arrive at the site, stem cells are activated, transforming into whatever type of tissue is needed — cartilage, tendon, ligament — for repair.

The stem cells are found in fat. For stem cell therapy treatment, fat is surgically removed from either the abdomen or from behind the shoulder blades. “Stem cells can also be harvested from bone marrow, but it’s a more difficult and painful procedure,” Dr. Horst says. The fat is processed in the laboratory and the stem cells are harvested, separated from the fat, and activated. The stem cells are then injected directly into the damaged area and/or administered systemically through an IV.

In Nittany’s case, her stem cells were harvested from abdominal fat. When she was fully asleep under anesthesia, Dr. Horst made a four-inch incision in her belly. While there is almost no blood associated with this procedure, Dr. Horst said, “We want fat that has some blood supply going to it because that’s what transports the stem cells. Right now, the stem cells are sleeping. This procedure wakes them up.”

Dr. Horst removed about four tablespoons of fat from just inside Nittany’s belly. The fat resembled a raw chicken breast in color and consistency. The vet tech stood nearby with an empty plastic container just slightly bigger than a urine specimen cup. Dr. Horst then deposited the handful of fat in the cup. The tech then took the cup of fat to their on-site lab for processing.

During the surgery, which lasts all of 15 minutes, Nittany’s breathing, blood pressure, oxygen saturation, and heart rate were constantly monitored. In the lab, the tech chopped up the fat, added chemicals, and stirred it continuously “until it’s about milkshake consistency,” Dr. Horst explains. This process to separate the stem cells from the fat takes three to four hours, after which the stem cells are ready for injection directly into Nittany’s damaged hips.

Back in the operating room, Dr. Horst closed Nittany’s incision with two layers of sutures inside, and a row of staples in the skin outside. In 10 to 14 days, Nittany will return to have the staples removed. Since the stem cell injections are done later that afternoon under sedation, Nittany woke up from the anesthesia within 30 minutes of the brief surgery. Results of this treatment can vary, but have been overwhelmingly positive. Dr. Horst says signs of improvement are typically seen over 60 to 90 days after the procedure.

An early stem cell therapy patient of Dr. Horst was Char, an 8-year-old black lab who suffered for years with arthritis in his right front leg. In the spring of 2014, the elbow joint of the leg became enlarged and Char nearly stopped using that leg altogether. Pain medications and joint injections administered by Char’s regular vet provided no signs of relief, and amputation was discussed. Then Char’s owners heard about stem cell therapy and came to Dr. Horst.

In December 2014, Dr. Horst performed the procedure on Char, and within three days Char was off all pain medications. At 60 days, Char was walking with just a slight limp, and at 90 days Char was running using all four legs.

The older an animal is, the fewer stem cells they have, according to Dr. Horst — though he says he’s had good results with this procedure on older animals, including an 18-year-old cat with severe hip problems.

Research is ongoing for stem cell therapy to treat other conditions such as liver and kidney failure, inflammatory bowel disease, and spine trauma. Currently, cancer patients are not treated with stem cell therapy because of a lack of information and research on its safety and effectiveness. However, Dr. Horst explains that research continues in the area of treating cancer in animals, just like in humans, by injecting cells from their tumor back into the body to activate the body’s own immune response. “Research for cancer treatment in humans and in animals definitely overlaps,” Dr. Horst says.

Stem cell therapy has been commercially available since 2004, and Dr. Horst has been doing the procedure since late summer 2014. He began his veterinary career in the Mercersburg area 35 years ago. For the first 25 years he was a farm vet, but in 2006 he began scaling back on farm calls for large animals to focus more on small animal treatment in his office. Nowadays, he estimates farm calls are only about 5 percent of his practice. He does an average of two stem cell therapy treatments per month, and is the only vet in the area who does the procedure.

Bang For The Bucks 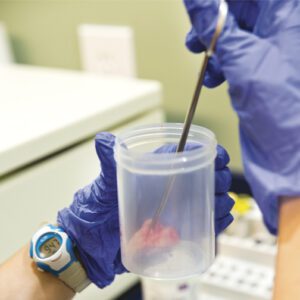 The stem cell therapy procedure costs about $2,000, but Dr. Horst explains that it can actually be a more economical treatment for common conditions such as hip dysplasia, arthritis, and joint damage when you figure the total costs of treating those conditions with more conventional protocols.

The annual cost of treating arthritis, for example, can include pain medication, which means regular office visits and blood work (to monitor the liver to make sure the pain meds are not damaging it), joint supplements, or laser therapy. These more traditional treatments can not only be more involved and sometimes less effective, but in the long run, can exceed the cost of stem cell therapy.

And since extra stem cells can be stored for future injections if needed, the harvesting surgery is done only once. The unused cells are sent to a MediVet lab in Kentucky where they are stored for future use. The storage fee is $150 per year.

As for Nittany? Steve says he picked her up from the vet’s office that same afternoon and she is doing well post-procedure. He says they banked her extra stem cells so that if her pain returns a few years down the road, they can take her back for reinjections, with no further harvesting surgery required.

“She’s not too happy about her belly being shaved, but other than that, she’s doing fine,” he says with a laugh. “We’re back to going on our daily walks, and she’s no longer licking her back paws.”

You And Your Four-legged Friend

For more information on stem cell therapy, or to see if this is the proper treatment for what ails your pet, contact Mercersburg Veterinary Clinic to schedule an assessment.