Creating The Creatures And The Cosmos 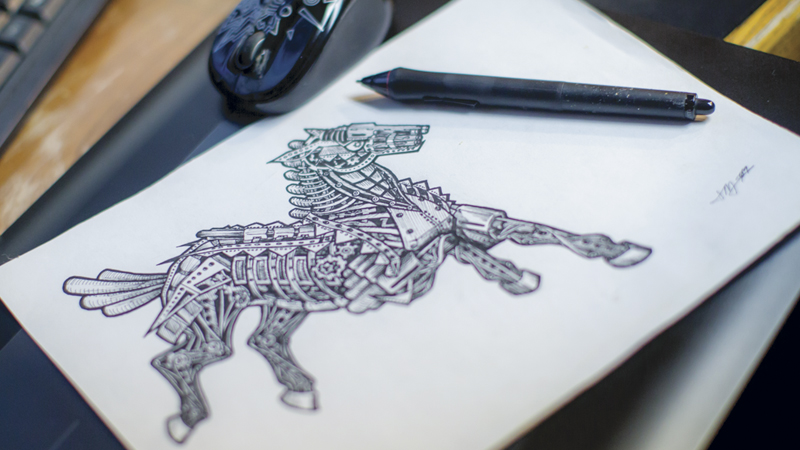 Artist Indi Martin explores other worlds shaped by her own imagination.

by Jeffrey B Roth & photos by Turner Photography Studio

From the Capon Mountains of West Virginia to a gritty, urban noir cityscape or the exotic landscapes of role-playing game fantasy worlds, the work of Indi Martin encompasses multiple universes. Drawing is something Indi has done all of her life. When she entered college, she was a pre-med major, but the siren call of art lured her back to her primary passion. While anatomy classes proved useful in her art career, Indi took only two art classes, both in oils, while in college.

As a primarily self-taught multimedia artist, Indi combines fine art traditions with digital media to create original paintings for fantasy RPG (role playing game), supplements. Originally from Tulsa, Okla., Indi co-founded Tortoise & Hare Creations — an online business — in 2011, with her writing partner, William O. Billman II. “I grew up in California, but my family returned to Tulsa when I was in high school,” says Indi, who illustrated and co-created “Cobalt”, a modern noir comic, and the “Fern Sea”, a steampunk children’s comic world. “I met my business partner while hiking the Appalachian Trail. After a few months of hiking together, we decided we wanted to start a creative business together. He lived in Maryland, so I ended up moving to (Funkstown) Maryland after a few more years in Oklahoma.”

William, Indi says, is the creative force behind many of the Tortoise & Hare Creations projects. When starting the business, William approached Indi, asking her to illustrate the “Fern Sea Chronicles”, which secured their company’s reputation as a well of creative vision. In early March, Indi, a tall, gregarious woman, busily sold her art while chatting with visitors at her booth at the Central PA Comic Con at the York Fairgrounds & Expo Center. She is an adept fan artist, who is well-known for her portraits of such pop culture television and movie icons as Sam and Dean Winchester — the main characters of the long-running CW series, “Supernatural” — Harrison Ford as Indiana Jones, and Yoda from Star Wars.

“I publish my books and my commissioned art through the company,” Indi says. “The company holds some licenses to comics and we do the comic for the Richard Garriott RPG game, “Shroud of the Avatar.” Richard —who is kind of the father of RPG games — created the groundbreaking ‘Ultima’ game series back in the 1980s. I am a big fan of the series and it was a dream come true to receive the license for the comic book project.”

Indi also created the art for the award-winning book “Veranthea Codex,” and is the primary artist for “The Dark Unknown” RPG game, while additionally contributing art for “Mists of Akuma” and “Sylph: Project Miyaji.” The “Veranthea Codex” was the first project Indi worked on as the primary artist. The process in creating the original artwork started with a written brief about settings and characters. From those notes, she began to develop the appearance of the characters. Indi adds that there is “a lot more collaboration” involved with the writer than she expected.

From Conventions To Commissions

“My primary income source is as a freelance artist for RPG companies, bands/albums, and individual character commissions, primarily; although it really runs the gamut,” Indi says. “I’m also a writer by night, and have published three books, but that’s my nighttime mistress, not my vocation. I’ve been art-ing since high school, but only seriously decided to make a go of it about seven years ago, and started putting in the time to improve.”

“Most of my work is (posted online) on my DeviantArt gallery,” Indi says. “My styles change primarily depending on either which medium I’m using — watercolor or digital — and, if it’s a commission, how much time I’m being paid for. Photorealistic gray-scale-to-color pieces are great, but they take a really long time, and so most people who want something like a character sketch or a small piece for an RPG will opt for a more cel-shaded look, which takes me much less time to deliver and thus costs them less.” 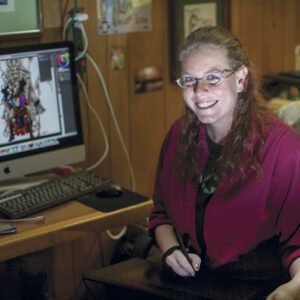 The variety of projects allows Indi a great deal of autonomy and latitude in creating characters, she says. But with larger projects, the work often involves concept art and expansive storyboards. With the “Veranthea Codex,” Indi was assigned an entire continent to develop for the main book. To complete the task, she had to know the geography, the races, the politics, religion, and culture of the fantasy world. One of her favorite projects was working on “Dark Unknown,” which

is based on the “Ultima” RPG universe. With lots of magic and a fantasy setting, Indi says she enjoyed the freedom of reimagining some standard monsters like dragons, giant spiders, and snakes, which she made particularly unusual.

For “Sylph: Project Miyaji,” a science fiction genre game from the 1980s, Indi painted an 18-by-24-inch watercolor outer space scene. When working on an RPG, she says she starts by creating four or five layout sketches to gauge her client’s reactions immediately. The process goes through at least three to four more stages before the project is completed though. “Last year was huge,” Indi says. “It was really my first major commission year.” Before that, most money came in from the convention scene, but Tortoise & Hare also developed the art for a geocaching card game, and they have several comic series in-house that they do. “Starting last year, commissions and RPG work became a much bigger part of my income and my work load, which I adore.”

Where The Inspiration Flows

“I have spent a great deal of time in the Capon Mountains, at a friend’s cabin, where I wrote a good portion of my latest book and have painted a lot of my watercolor paintings,” Indi says. “I think the mountains there are magical, and creativity is easy to come by. I’ve gathered a lot of inspiration from the Capon Mountains, and my centerpiece at my last watercolor gallery show was a very large (24-by-36-inch) single-matted triptych called “Seldom Seen,” highlighting a path found on their property down there.”

Last November, Indi had a gallery show at The Fine Arts Company in Hagerstown which showcased her nature paintings. Besides using the Capon Mountains as a subject, she used watercolor glazes of pigments made with materials native to the region, such as wood ash mixed with watercolors.

Lately, Indi has been really excited about her writing career. The “Gina Harwood” book series — which she describes as “X-Files” meets H.P. Lovecraft’s “The Call of Cthulhu” — mixes fantasy and dark horror with the noir detective genre. She chalks her art and painting skills up to her abilities to fully visualize her characters and settings that provide a visual cinematic foundation for her books.