A Café, A Canal, And A Bit Of Karma 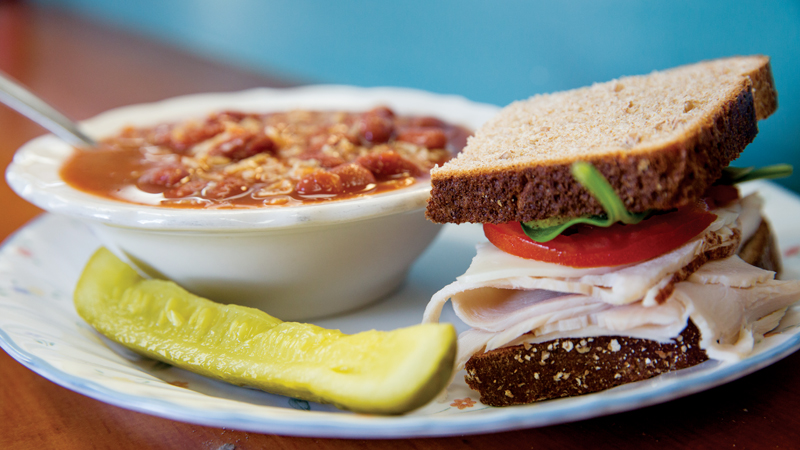 Desert Rose Café offers a respite for hungry travelers, serves as a meeting place for locals, and is a spot for the community to connect.

Rose Harris, co-owner of Desert Rose Café and Catering in Williamsport, tells the story of how she and her café were named. “My parents were hippies. I was born in Tennessee in a camouflage school bus and we moved to the desert when I was 13 days old. They had to name me before they took me out of Tennessee.” Rose pauses, then says reluctantly with a laugh, “So they named me Desert.” Desert Rose, in fact.

She disliked her name growing up, and sometimes people would mistakenly call her “dessert,” so she just goes by Rose now. “It’s still my biggest pet peeve, the dessert and desert thing,” she says. But Rose laughs it off and takes it lightly. However, her name came in handy when having to christen the café, suiting it well.

Eight years ago, Rose and her mom, Beverly Kipe, were talking about what they wanted to do when they grew up. “We both said at the same time our dream job would be to open up a café,” Rose says. They wanted to have a place that the community could come together. “Kind of like a Cheers without beer.” 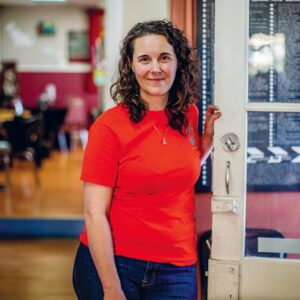 Rose was ready to start a new endeavor, so she and Beverly bought a turn-key in April 2008. They started out small — too small — and immediately outgrew their first space. Three years later they were able to move the café to its current location on the corner of 42 N. Conococheague St.

Now, bicyclists taking a detour from the C&O Canal, locals talking politics, kids stopping for ice cream after school, and anyone in between all find an easygoing, sit-and-stay-awhile atmosphere at the café in the town square. Rose will greet you with her bright smile and cheery nature. Gourds hanging in the windows and two comfy armchairs in front of a corner of bookshelves housing a free library in the back room give it an eclectic, at-home feel.

Rose calls it karma (their tagline is “Serving karma by the cup.”). But whether or not it is the karma, the café offers a bit of respite for hungry travelers, a meeting place for locals, and a spot for the community to connect.

Something Good For Everyone

When the café first opened, Rose focused mainly on providing healthy and vegetarian options — especially for those who find it hard to eat well when dining out. “We wanted something that could incorporate everybody’s palate and lifestyle.” With her brother being vegetarian and one of her chefs having certain food allergies, Rose reassures that they are very aware of what goes into their dishes and are happy to accommodate for food allergies.

They wanted to have a place that the community could come together. “Kind of like a Cheers without beer.”
Rose Harris

While the selection of meatless sandwiches and the blackbean burger appeal to vegetarians, the café menu features a little bit of everything: from oatmeal and waffles for breakfast, to soup, salad, and sandwiches in the afternoon and light fare for any time in between. A popular choice is the pick-two combo of some satisfying red beans and rice soup and the Bicycler’s Best sandwich made with turkey, provolone, spinach, tomato, and spicy mustard on wheat bread.

But don’t fret, customers looking for a sloppy Joe or bowl of nachos can find those too. Rose says that over time she had to evolve the menu and provide more crowd-pleasing options, like soft pretzels and chili cheese dogs, so that there really was something for everyone. “In the beginning I was thinking more holistic and natural, and then I realized I had to appeal to the local customers too.” She didn’t want to deter anyone from coming in. 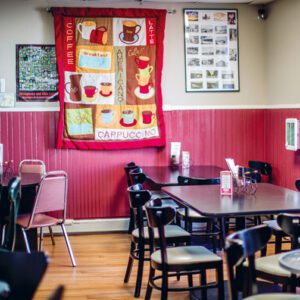 The café is certainly a family affair, with her mother as co-owner, mother-in-law as baker, and three young sons as part-time helpers. Although, “The 13-year-old pretty much just eats everything,” Rose says. But the café is also a community affair.

In a small town of about 2,000 residents, everybody knows everybody. Rose says the locals like to come in and talk politics or town news, and they see the café as a place for them to be heard and make change. She shares that being in a small town has its struggles. “But the locals have really stepped up over the last several years…and now that we’ve built such a good community, we do well all winter long even.”

Because of the close-knit community, people are always willing to help, and the café has given them the opportunity to do so. “When something happens to someone, then we’re able to jump into action and do something for them.” Rose says that in March, when a neighbor’s house burned down, the community raised about $5,000 through a jam session and raffle at the café.

Café On The Canal 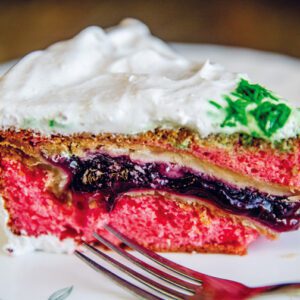 Over the years, the café has also built a great relationship with the C&O Canal because of their close proximity. Most of the canal’s volunteers eat at the café and in Williamsport on a regular basis, Rose says. In turn, they direct travelers to the café.

Word gets around through bicyclists on the canal who blog about their trips and stop at the café for a bite to eat and to recharge. Rose says, “We try to get them in and make sure they’re hydrated, fill up their water bottles, help them get to the next town.” She’s even let one bicyclist borrow her car to buy a replacement bike tube.

The community at the café reaches beyond Williamsport and the canal, as evidenced by a map of the United States in the back room with a pin on every state from out–of–town visitors. There’s even a world map for international travelers who are visiting stateside.
Some days it’s overwhelming, but most days Rose loves what she does. “We have such a great sense of community in the area, and I love getting to know locals and people from all over the world. That’s what makes coming to work every day really worth it.” 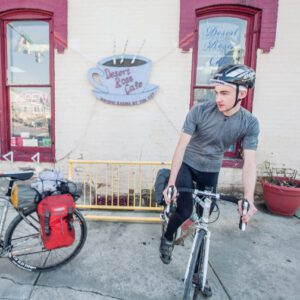 Looking ahead, Rose says she plans to keep the café running years into the future. “We’ll still be going,” she says confidently. And with the completion of the canal’s aqueduct next August, Rose anticipates tourism to skyrocket. The aqueduct will put Williamsport on the map for being the only one with every working aspect of a canal in the United States. “Any thought of me closing just went out the window when they actually got the funding (for the project).”

In turn, Rose hopes to be able to employ more staff so that she can get out from behind the counter into the community and socialize while keeping the small, intimate feel of the café. “That’s my goal…to not have to deal with any of the food or taking people’s orders or doing dishes, and I can just come out and play with my customers.”