Two Rebels With A Cause 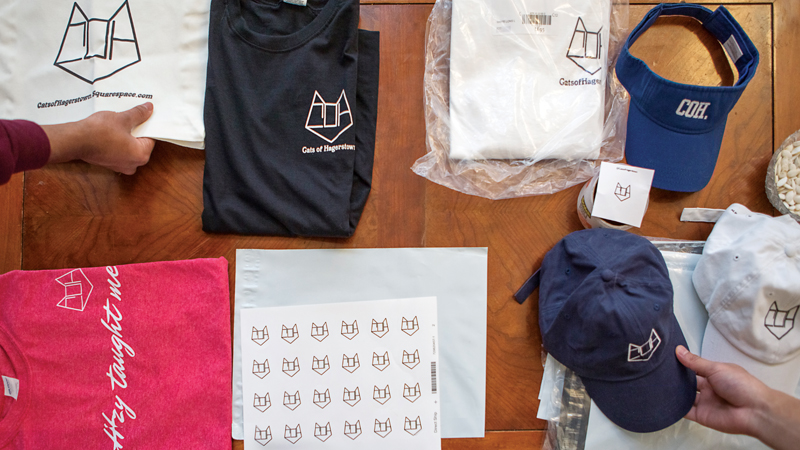 South Hagerstown High students Awais Mahmood and Miguel DeCastro capitalize on what the Internet does best.

What do future business and biology majors Awais Mahmood and Miguel DeCastro have in common? Here’s a hint – it’s not dogs. These two South Hagerstown High School seniors are the driving forces behind the local phenomenon known as Cats of Hagerstown. It’s a website. It’s an online shop. It’s a Twitter and an Instagram page. And all of the proceeds they raise through their apparel sales go directly to benefit the Humane Society of Washington County.

Why cats, you might ask? Because, Miguel laughs, “We love all animals. We just have a slight bias toward cats.” While allergies prevent Miguel from keeping cats of his own, Awais has three: Biggie, Shwayze, and…Puppy. “Dogs, when they see me, I guess they know I’m just a cat person,” Awais explains. “And they always bark at me.” His tepid response to dogs started long ago and has followed him through life. And Miguel, too, has a dog horror story to tell if you ask him nicely enough. So don’t expect to see a serious Dogs of Hagerstown effort anytime soon — at least from them. And besides, these two highly-driven and good-humored teens have their hands full already with their attempts to build their organization into a formidable force to benefit local charity. And it all began over lunch.

“We were at lunch, at school,” Awais recounts, “And I saw the Cats of Instagram page. And we were like, ‘Oh, wouldn’t it be cool if my cat was on this page? And then, what if his cat was on this page, or hers?’” So Awais built up a webpage on Squarespace, and Miguel set about building the engaging and user-friendly website that, a mere month later, would garner between 600 and 700 followers. “He had a vision.” Awais is quick to give credit.

If you stop by the Cats of Hagerstown page today, you’ll encounter felines of every make and model — from calicos to shorthairs, striped to spotted. And they’re tripping over themselves with cuteness. 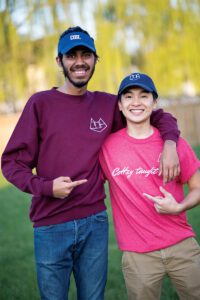 Cats of Hagerstown was virtually an instant local sensation, prompting hundreds of Hagerstown residents to upload shots of their own fetching felines, complete with captions. There are cats reclining in shopping bags and cats swaddled in favorite blankets, cats patiently lounging in luggage and cats hogging the bathroom sink. And if your cat isn’t there, what are you waiting for?

Awais estimates there are between 350 and 360 cuddly cat images taking up virtual real estate at the Cats of Hagerstown pages, and both boys hope the numbers only increase — because neither predicts an end in sight to their collaboration anytime soon. Awais intends to study business and marketing at Montgomery College from where he hopes to transfer to College Park, but he plans to take “Cats” with him by possibly branching off into Cats of Gaithersburg or even Cats of College Park.

Miguel’s future plans include the United States Air Force Academy in Colorado and an eventual degree in biology. But he plans to carry the cat-shaped torch from the East Coast to the West, as well. The only obstacle the boys foresee is financial. Their ultimate plan is to gain official nonprofit status for Cats of Hagerstown, but that involves retaining the services of a lawyer. To help, Miguel set up a GoFundMe crowdfunding campaign with a goal of $2,000 to cover the entire cost. Once it is legally a nonprofit organization, an actual brick-and-mortal shelter could become the next priority. So could a type of foster care situation for cats who find themselves experiencing hard economic times, the two explain.

The Cause For The Paws

All money donated to the Cats of Hagerstown GoFundMe campaign is tax deductible. Miguel has also placed donation boxes on every page of their website for visitors who wish to help in that way. And then there’s the official Cats of Hagerstown apparel — appropriately called Purrchandise — that’s both trendy and affordable. Friend and North Hagerstown High graduate Fawad Younas designed the original logo and gifted it to Awais to benefit the charity.

To date, the boys have been able to donate around $350 to the Humane Society of Washington County, most of which came in from the sales of shirts, hats, and other official purrchandise. When asked how well their idea has been received, both boys are enthusiastic. “There’s a lot of love and support,” Awais assures. “And that’s why it’s so much fun…Everyone in our school knows us, one way or another, because we’re connected to Cats of Hagerstown. Even in the guidance office — the exit and entrance signs are our logo.” 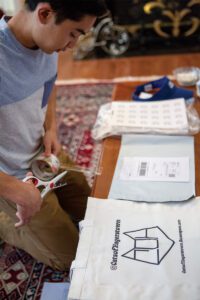 “The people,” Awais theorizes, “they want something to push for, and they want to back something. This is fun, and it’s cats — everybody loves cats. The Internet loves cats.” The teen even goes so far as to credit his experience co-piloting this project as helping him better define his career path. “Getting into this is kind of what sparked my interest more toward marketing.” But that wasn’t the initial intention behind the project. In the beginning, it was just two boys, an Instagram page, and a desire to do something for the greater good.

Awais explains, “Really, you know, we’re just two kids, and we love cats, and we’re trying to make a difference.” “Small town, big impact.” Miguel agrees. As do the hundreds of cats of Hagerstown who are immortalized forever on their webpage, staring out windows and loitering on kitchen chairs all across Hub City. And it’s all thanks to two South High Rebels with a cause.

If You Have A Mewment

You can check out Awais and Miguel’s creation — and more cat puns than you can shake a catnip-laden stick at — at www.catsofhagerstown.squarespace.com. And if you’re feeling generous, you can donate to their cause at www.gofundme.com/84swzqps.