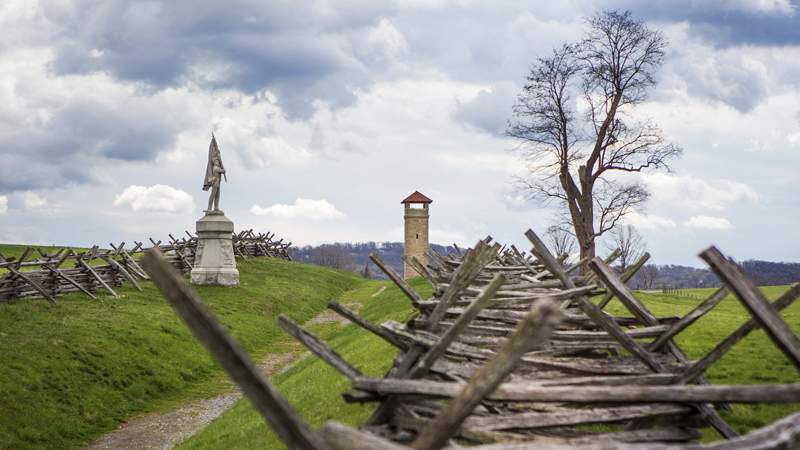 Imagine traveling back to the foggy, peaceful dawn over Western Maryland’s picturesque rolling hills that was abruptly shattered Sept. 17, 1862. Roaring cannons and rifle fire punctuate the air as 100,000-plus Union and Confederate soldiers commence fighting under the leadership of Union Gen. George B. McClellan and Confederate Gen. Robert E. Lee.

A somber day forever etched into U.S. history had begun. The Battle of Antietam was the culmination of the Maryland Campaign of 1862 — the first invasion of the North by Gen. Lee and the Army of Northern Virginia, and the bloodiest one-day battle of the Civil War. More than 23,000 soldiers, including six generals, were killed, wounded, or declared missing when the 12-hour siege concluded.

The Battle of Antietam was pivotal in U.S. history. It eased the way for ratification of the Emancipation Proclamation, which freed slaves in rebellious states and provided Union forces with goals to preserve the Union and end slavery. It also added to the reshaping of field medicine logistics, and civilian aid after natural disasters through the efforts of Clara Barton, who was a battlefield nurse and later founded the American Red Cross. The engagement also greatly influenced how the U.S. would memorialize battlefields in the future.

Today, the National Park Service (NPS) operates, maintains, and owns the 1,900-acre Antietam National Battlefield. Through meticulous preservation of its landscapes and most of the 11 farms within its boundaries, Antietam National Battlefield provides an authentic view into its significant history through many tour options, providing visitors from around the world a fascinating journey back in time.

Start your tour at the Visitor Center to explore the museum and view an introductory film narrated by James Earl Jones. If you have an hour or two, include a battlefield talk and museum store visit. Expanded NPS Ranger talks and themed Ranger-guided caravan tours are scheduled in summer.

The self-guided 8.5-mile car-friendly road tour begins at Dunker Church with 11 marked stops. Done at a leisurely pace, it takes just over two hours. Detailed signage explains the battle’s history, but visitors thirsting for more knowledge may purchase an audio CD at the museum shop. Detailed hiking and auto trail maps, plus specialty events schedules, are also in the Visitor Center. Limited bicycling and horseback riding is permitted in designated areas, with rules and regulations clearly outlined on the park’s website.

“Our 25 guides are from all walks of life, including educators, rangers, ordained ministers, retired military, civil servants, and include a veterinarian, dentist, and mining engineer.”

Antietam Battlefield Guides undergo rigorous training to become NPS-certified to offer a variety of tours covering the Battle of Antietam and Maryland Campaign. Tours range from two-, three-, and four-hour battlefield studies to an all-day Maryland Campaign tour visiting Antietam plus nearby South Mountain, Harpers Ferry, and Shepherdstown battlefields. “We offer driving and bicycle tours, hikes, and we even have a couple of guides who lead motorcycle tours. We can customize tours to our clients’ interests.  We often have descendants of Civil War soldiers who are interested in the particular regiment where their ancestors fought,” explains Jim. 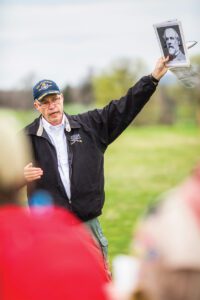 Group tours are also available to organizations. “We recommend scheduling tours in advance when at all possible, but there are a limited number of walk-in tours available on any given day,” Jim shares.

Many landmarks dot the battlefield landscape. Monuments primarily built by battle veterans and states may be found where troops fought. There are 96 monuments, most honoring Union troops. Six generals were either killed or mortally wounded. The site where each fell is marked with a mortuary cannon monument, which is an inverted cannon barrel in stone block.

Other interesting points include the Pry House Field Hospital Museum, which served as the headquarters for Gen. McClellan and Medical Director Dr. Jonathan Letterman, and is considered the birthplace of military and emergency medicine. Also worth a visit are Dunker Church; North, East and West woods; the notorious Bloody Lane; Mumma Farm; Burnside Bridge; and the Antietam National Cemetery, which is the final resting place of 4,776 Union soldiers and veterans representing four additional wars. 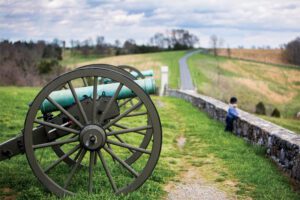 Antietam National Battlefield is one of 390-plus parks in the NPS, which celebrates its 100-year anniversary this year. To honor the NPS centennial, Antietam National Battlefield will be featuring a “16 Miles in 2016” competition, with the first 100 hikers completing 16 miles and the trail checklist receiving a special centennial pin. Also, entry fees are waived Aug. 25–28 for National Park Service Birthday Weekend; Sept. 24 for National Public Lands Day; and Nov. 11 for Veterans Day.