The Need for Speed: A Family Tradition 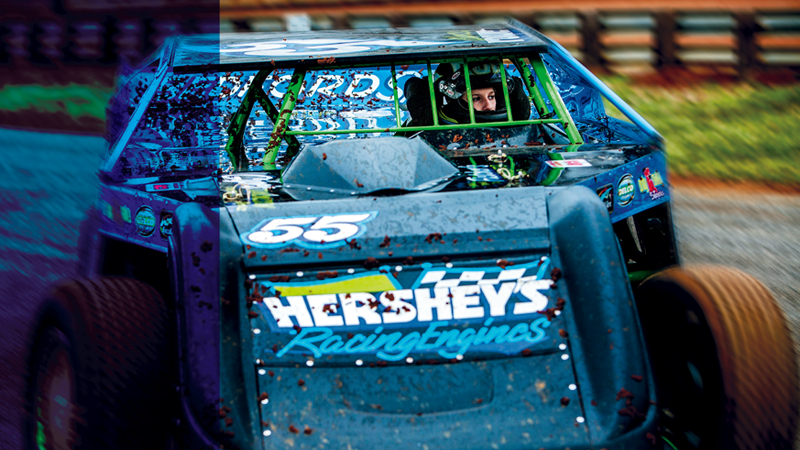 “As tires rumble down the track, you can feel it in your whole body. It’s not made-up drama; it’s real life.”

Engines roar and the Hagerstown Speedway grandstand rumbles. Number 55 is one of a dozen racers screaming around a quarter-mile dirt track in a blur of color. As cars without brake lights slide sideways into the turns, number 55’s builder and crew chief, Will Rowe, goes through a mental checklist, making sure he’s done everything right on his end. After all, he’s been strapping his driver into some kind of car seat for the past 19 years.

What you might not expect is who climbs out of the car after the checkered flag gets flashed. It’s his daughter’s ponytail you see swing loose when she pulls off her helmet back in the pit. 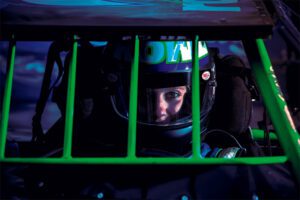 At 19, Alyssa Rowe has already been racing for 10 years. She competes now in the E-Mod (economy modified) division but earned her stripes coming up through the ranks. “I started driving when I was nine in a small car called a Cyclone,” Alyssa reports. “It’s like a go-kart and about as fast as a lawn mower! Since then, I’ve raced in four different divisions and in probably about 100 races.”

While dad Will is the mechanic, coach, and all around git-r-done guy for Alyssa when she’s behind the wheel, he also set the bar for her racing career. A prominent dirt track competitor in his own right, Will started racing in 1971 and raced full-time for several years up and down the Eastern seaboard. He still races and has even earned his place as a Hall of Fame driver with the Hagerstown Racing Club.

“My earliest memories of racing are being at the track when I was probably 6 or 7,” Alyssa recalls. “My dad was my hero and I followed him around like a puppy. I remember scraping mud off his car every time he came in off the track and distinctly remember leaving Victory Lane after he won a race at Roaring Knob Speedway. I was riding on the side of his car back to the trailer and had the biggest smile on my face. After that night, I knew I wanted to drive a race car. I watched my dad for years and saw how happy this sport made him — over-the-top happy. Racing was our way of life. We spent every weekday at the race shop and every weekend at the racetrack. It’s where I grew up and it shaped me into the person that I am today.” 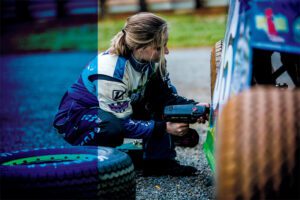 To date, Alyssa has 24 feature race wins in her career, including three in the E-Mod division. “I am incredibly proud of winning the 2015 Bedford (Pa.) Fair race, my first ever E-Mod win!” she says, beaming. “I battled long and hard with one of my toughest competitors and won the biggest race. That’s also one of my favorite memories with my dad. There was a dirt mound at the end of one of the turns and my dad would stand there and wave his arms at me. Sometimes, it was a thumbs up, other times it was a wave to get my behind moving! Now, he stands on that mound every weekend to send me those disapproval or approval signals. We use every moment at the racetrack as a learning experience.”

When she’s not at a speedway, Alyssa is a full-time college student and she works 30-plus hours as a gymnastics instructor. Much of the free time she has left is spent in the shop working alongside her dad, who builds and maintains her car and others. E-Mods like Alyssa’s have a metal tube chassis and fabricated metal on the sides for appearance. “She’s an OK mechanic but a better fabricator,” Will laughs. “I keep telling her she needs to learn to weld. If you’re gonna race, stuff’s gonna break and you need to know how to fix it!”

“Our women racers are starting to make some noise and they’re stepping into victory lane.”

“A lot of engineering and math goes into designing a car,” notes Chuck Knouse, former hobby racer, car builder, and owner of Chuck’s Hot Rod Shop in Chambersburg. “All classes have rules about how you can build, and they specify a minimum weight for the car when you get to the track. Every builder wants to be at the weight or less at the outset. The less weight you have, the less mass you are trying to move, and that’s like free horsepower. If you build a car that’s underweight, you can put the weight where you want it to make the car handle better,” Chuck explains. “Racers must also buy their gas at the speedway and there are rules about what additives you can mix, so that levels the playing field at the outset,” he adds. “What it takes is an innovator to know how to set up the car for the given weather and track conditions.”

Alyssa is quick to point out that innovation is part of what has earned her dad so much respect in racing’s competitive arena. “Dad didn’t have the best of the best stuff. People respected him for that. They saw how well he did with stuff from the junk yard because he knew how to make it work.” Will adds that racing is transitioning from hobby to profession now, noting that race cars can cost upward of $40,000 today. “We didn’t spend $40,000 in ten years!” 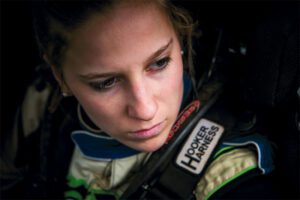 If car weight and fuel have to be equal and a race team doesn’t have the big bucks to buy all new parts like the pros, what’s the competitive edge? “A good experienced driver can make an average car perform. An inexperienced driver cannot make a perfect car perform,” Chuck states as a matter of fact, and adds that the crew chief plays a critical role. “A smart crew chief walks the track prior to the race to evaluate actual conditions at that time,” Chuck says. “Drivers also need to know the track. Even though they know their car, the conditions of the track affect their style of driving.”

And how does a father step away from being a dad and take on his role as a crew chief when his teenage daughter is flying by at 120 mph? Will Rowe accepts that Alyssa is safer on the speedway than she is on the interstate, given improvements in racing safety and technology. With a Nomex suit, fireproof shoes and gloves, a $650 helmet, and use of the HANS (head and neck system) harness, today’s racers benefit from the tough lessons taught by other drivers, including the death of Dale Earnhardt Sr. Will has watched the evolution and knows how effective the safety improvements are. He, too, graduated from the school of hard knocks. He suffered eight broken vertebrae and six broken ribs, among other injuries, in the days before in-car restraints made the sport much safer.

“They only knew me as Will Rowe’s daughter, but I have found a home at the racetrack. Today I am Alyssa Rowe.”

The End Of The Boys Club

Hagerstown Speedway is only one of Alyssa’s racing venues and she’s not the only woman racing there. You can also follow Michelle Walls running Pure Stock and new this year in Alyssa’s division is 15-year-old Hailey Kaiser of Winchester, Va.

Danny Wilson, the public relations director for Hagerstown Speedway and the 2016 announcer, has seen changes in the grandstand now that there’s some diversity on the speedway. “We’ve always had female fans who followed male drivers,” he says. “Now we have more women coming to follow women drivers and that means we’re getting more women into the stands.”

“Our women racers are starting to make some noise and they’re stepping into victory lane,” Danny reports. “Alyssa, Hailey, and Michelle are all good people. They not only present themselves and their teams well, they are good for the sport. We couldn’t ask for three better representatives.”

Chuck agrees that women are a good boost for the sport. “Way back when, there was a different attitude about women in racing,” he reflects. “Today it’s about the talent and has nothing to do with gender. Come race day, it doesn’t matter. It’s who has the equipment and the talent to take the checkered flag.”

“Come see us! First time fans get an adrenalin rush!” says Danny as an invitation for fans and newbies alike. “Racing at Hagerstown Speedway is family-friendly and we sponsor lots of Kids Corner events. You’ll see people of all ages in the stands. We have a lot of second-generation drivers and even some from the third generation. We can say the same thing about our race fans.” Chuck sums up the racing experience this way: “For fans, racing is about the thrill of non-scripted live action. It fills all your senses completely and overwhelms some of them. It’s not like a movie theater where you’re only involved visually and with a prerecorded soundtrack; racing involves your entire being. As tires rumble down the track, you can feel it in your whole body. It’s not made-up drama; it’s real life.”

The 2016 season at Hagerstown Speedway began in March and will run through October with 25 racing events on the schedule. Most races begin at 7:30 p.m. Saturday, with a few Friday events as well. In addition to Alyssa’s current division of E-Modifieds, Hagerstown also hosts Super Late Models, Model Sportsman, Pure Stocks, Hobby Cruisers, 410 Sprints, Crate Late Models, and Rookie Cars. 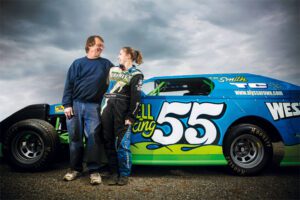 “I’m always humbled and in complete awe when I find out that I have fans or people who follow my racing career at a track that we visit. It blows my mind again and again,” Alyssa admits. “I am so humbled to see how far we have come as a race team.”

“I’m also proud of how hard we have worked to get to where we are today. We started off with an open trailer with no spare parts, an incredibly small engine, and all used equipment. When I started racing, no one knew my name,” she adds. “They only knew me as Will Rowe’s daughter, but I have found a home at the racetrack. Today I am Alyssa Rowe.” Will adds with a smile, “And now, I am Alyssa Rowe’s dad.” And that’s just fine with him.