Spring for Some Art 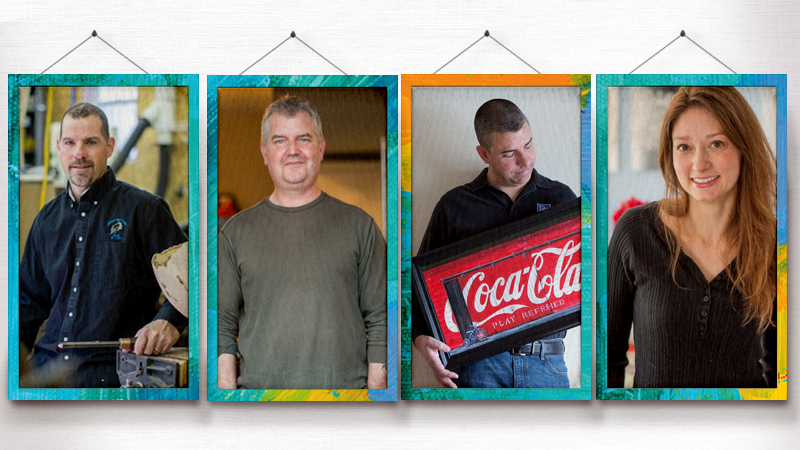 Local artists who will be participating in local arts festivals share their passion and inspiration.

If the walls or shelves of your home are in desperate need of a pop of color or a new focal point, there are a number of arts festivals set to take place in the region over the next several months. And for local artists, these shows provide a critical outlet to get their work noticed.

“There are a lot of different ways for artists to get their wares out,” says Mike Cruz, a Keedysville wood turner whose art is sold through his business, Knotty by Nature. “Certainly there are galleries and stores, but those are limited. You can sell online — that’s unlimited. With online sales, people can’t come and touch the product. They can’t feel it. They can’t really see it for themselves. In stores, they can touch it and feel it but they don’t get a sense of the artist. The beauty of the shows is you actually get to meet the person who put the energy, effort, and time into making that piece along with seeing it, feeling it, touching it, smelling it even. Quite honestly, I think what ends up selling my pieces often is the feel. …That’s something you can’t get online.”

Hagerstown-based mixed media and collage artist Lauren Hoffman participates in shows because “they are a wonderful way to network and meet new people — whether they’re customers or fellow artists who offer great advice.”

The shows are important because they expose residents to a variety of different forms of art, according to watercolor artist Chris Carr. “You go to these events and there are all kinds of great crafts and arts,” the Myersville resident says. “Some stuff I have never even considered. It’s amazing to see some of the talent that people have.”

Hagerstown artist Daniel Paul Murphy, who runs DM Designs LLC, enjoys talking with people at events and seeing their reaction to his artwork, which includes pen and ink illustrations, watercolor paintings, and stink bug novelty items. His talks with residents during shows inspire him to keep producing art — whether he sells something or not. The festivals show visitors “that there is still a lot of art culture around us,” he says. “You don’t have to go to the (big) city to find really cool ideas and art and design.” 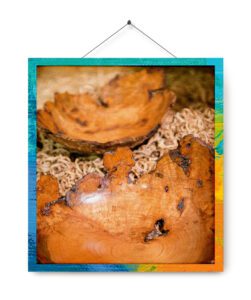 Mike Cruz will have a tent at the Frederick Festival of the Arts, which is set for June 6and 7 at Carroll Creek Linear Park. Using local woods like cherry, walnut, maple, and ash, folks can peruse his turnings of bowls, pens, hollow forms, and Greenstix golf putters. Each piece is made from trees that have come down in storms, died naturally, or were saved from becoming firewood.

He first got into wood working as a child when his parents were refinishing their home’s basement. He picked up extra blocks of wood that he found and went to work creating a horse, a train, and a boat. “It came naturally to me as a little kid,” he says.

“It doesn’t look like it is going to be much, and it turns out to be an absolutely stunning piece of wood.”
Mike Cruz

Mike decided to start his own business in 2013 after people started asking to buy the turnings he was making. “I was brainstorming to come up with a name for the company with my brother,” he says. “We were throwing names back and forth. …We were thinking about anything that had to do with knot or burl or bowl or whatever, and Knotty by Nature came up.” But it was his accountant who ultimately convinced him to use the name. Mike says many people will reference the 1990s rap group Naughty by Nature (‘You down with OPP? Yeah you know me.’ Try getting that out of your head now.), and tell him they like his play on the title. Many will remember his booth year after year. “That is what a name is about — getting people to remember you,” he says.

While he works full time on his family’s 21-acre horse farm, the memorable part of his turning passion is uncovering the secrets of the wood. “You take a piece of wood. You might think it is going to be a great piece and it doesn’t turn out to be much at all,” he says. “You take another piece that you have no idea about. It doesn’t look like it is going to be much, and it turns out to be an absolutely stunning piece of wood. Turning the piece of wood and coming up with a finished product that really shows off the beauty of the wood is one of the major highlights for me.”

Are you looking at a photograph or a painting? With Chris Carr’s meticulous attention to detail, you might not be sure. Taking a peek at his online watercolor painting gallery, you may recognize familiar local sites like Dolles Candyland in Rehoboth Beach, The Candy Kitchen in Frederick, and St. John’s Lutheran Church near Myersville. 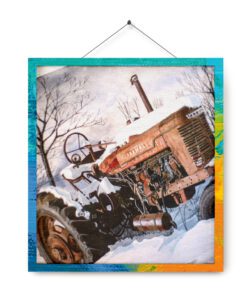 Chris will be at Boonesborough Days, which is scheduled for Sept. 10–11 in Shafer Park, and the Mountain Heritage Arts & Crafts Festival Sept. 23–25 near Harpers Ferry, W.Va. His works on display will include original paintings and prints. “I pretty much drive around with a camera quite a bit,” he says. “If I see something I like, I will take a picture. I have a big inventory of pictures and sometimes I will go back to those (for paintings). I try to do stuff that people will recognize and gravitate toward.”

Growing up, Chris saw his dad, Phil, do pen and ink drawings. While attending Gov. Thomas Johnson High School in Frederick, Chris gravitated to scenery watercolors because of his art teacher and acclaimed regional artist, Barry Richardson. “He had a big influence on me,” he says.

One piece takes a minimum of a couple of weeks to complete, and can require an entire month. He sketches out the picture on a piece of watercolor paper and refines it as he goes along by looking at the original photographic image on his laptop and zooming in to get precise details.

Art is a big part of Chris’s life. He works by day as a full-time graphic designer and spends his free time working on his watercolor pieces. A fun aspect of every festival is meeting new and repeat customers. It is gratifying to him when customers come back year after year to get more prints. “That’s really fun,” he says.

Lauren Hoffman enjoys all aspects of the creative process. “I feel like my brain really gets a workout from trying to come up with new ideas to figuring out a way to execute them,” she says. “I can’t lie. Making a mess in the process is fun too!” 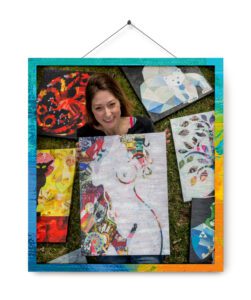 Taking inspiration anywhere from animals to Disney movies to sci-fi material, Lauren creates whimsical, bohemian, and eclectic mixed-media and collage art using spray paint and acrylic. You will find her work under the tent for Artpoptart. “My art has a pop art kind of feel in that the subject matter usually comes from popular culture,” she says. “The name also is a nod to my daughter who simply can’t live without pop tarts!”

Setting up shop at the Frederick Festival of the Arts and Boonsboro’s Greenfest on May 7, Lauren plans on “making a series of new pieces this spring that’ll put a new spin on Artpoptart and of course I’ll still have some of my best sellers at my shows too. …I’ll have original pieces as well as reproductions on paper and canvas for every budget because every home deserves to have some cheery art on its walls.”

A former curator for The Fine Arts Company in Hagerstown, Lauren is now a full-time artist. “Curating shows was a pleasure and I’ll always have a place in my heart for the artists and customers at The Fine Arts Company,” she says. “But I felt that right now was the perfect time to focus all my energies into advancing my own career as an artist.”

So what drives her to succeed? “My favorite part of being an artist is when one of my pieces puts a smile on someone’s face and really resonates with them,” she says. “It makes all the hours of frustration worth it!”

Daniel Murphy has done pen and ink illustrations and watercolor paintings since elementary school. “I’ve always been into graphics and whatnot, and my drawings go hand in hand,” he says. “If I can’t find what I want, I make it.”

“I like seeing people’s reactions to my artwork. That’s what really makes it fun for me.”
Daniel Murphy

With a fascination for antiques, history, and old barns, Daniel gets his inspiration for pieces both from real life and his imagination. “I always put my own little spin on stuff,” he says. “I like to put as much detail as possible in my images, but the most joy I have is when people get excited about that exact detail. I like seeing people’s reactions to my artwork. That’s what really makes it fun for me.”

His illustrations have also been published in the book series “Red Hawk: A Civil War Journal,” which was written by Kenneth Postalwait. Creating historical drawings including scenes from battles at Sharpsburg, Antietam, and Monocacy, he is currently working on pieces for the third book. 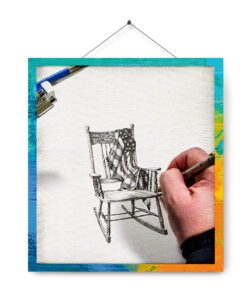 Greenfest is an event that promotes conservation efforts and it is appropriate that Daniel will be attending. He is a huge supporter of the buy local movement thanks in part to stinkbugs. Native to Japan and China, the pesky bugs are believed to have stowed away in a crate sent to the United States and have caused crop devastation and residential annoyance ever since.

Daniel decided to create a line of novelty gifts featuring the foul-odored bug, including adhesive notepads, coasters, mouse pads, and stickers. “It gives me an opportunity to talk to people and just try to persuade them to stay out of Wal-Mart and start to think and shop local, small businesses,” he says. Some don’t want to touch the pieces, while others ask if he can make them scratch and sniff — complete with the noxious smell. “Everybody’s reaction has been all over the place,” he says.