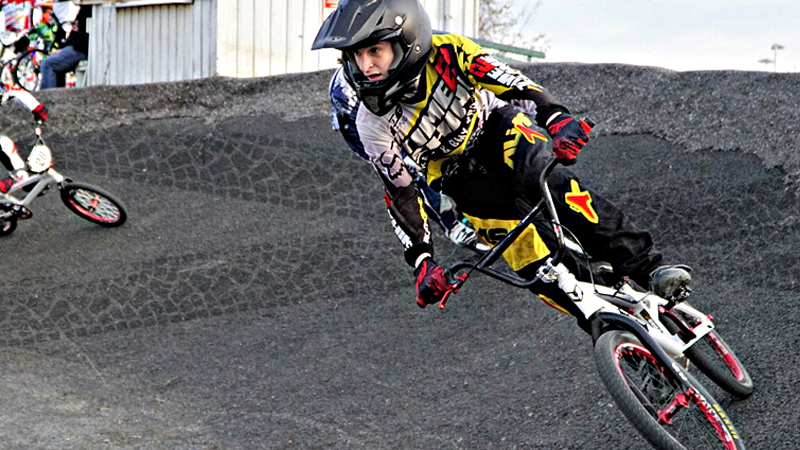 Shredders from 2 to 60 are testing their mettle at Fairgrounds Park to race with HagerstownBMX.

“Riders ready. Random start. Watch the gate.” With that announcement, seven young riders stand up over their bicycles, wearing brightly colored racing jerseys — many coordinated with safety helmets — their front wheels touching a slanted gate on the starting hill. A series of beeps follows and starting gate lights change from red to yellow to green. The gate drops and they’re off, racing down the serpentine dirt track, riding over jumps in varying arrangements, around tight berm turns, some taking to the air over bigger jumps, both to save seconds and to wow the cheering crowd of onlookers. It’s 1,100 feet of furious riding to cross the finish line.

This is BMX racing, held at the Hagerstown Fairgrounds Park on a track maintained by HagerstownBMX — the local group that has been devoted to BMX racing in the area since 1999. Races are held on Saturdays, weather permitting (bikes, speed, and mud don’t mix well), and anywhere from 80 to 90 racers of all ages participate. When state-level races are held at the Hagerstown track, that number might swell to over 300.

USA BMX — the parent body for BMX racing — recognizes four criteria to determine each racer’s classification for competition: age, gender, proficiency, and wheel size. Bikes are either 20 inches or 24 inches, an indication of their wheel size. The 20-inch classes are divided into novice, intermediate, expert, and pro levels, while the 24-inch cruiser class is not divided into levels like the 20-inch classes. Many participants race both sized bikes.

HagerstownBMX has riders ranging in age from 2 to over 60, with all skill levels represented. Hagerstown Track Operator Timm Raum remembers once awarding a medal to a racer in the “Strider” class, where very small children use a bike without pedals, propelling themselves along the ground with their feet, to a young man only 16 months old who accepted his award with a pacifier in his mouth. That kid is now 6 and still racing at HagerstownBMX.

It’s the fun, family-oriented atmosphere that attracts many parents to the sport, supporting their kids’ drive to just go as fast as they can on a bicycle — a drive seemingly universal in kids. Ryan Harpster of Hagerstown is one such parent. His son, Gage, was just 5 when he saw BMX racing on television and was so taken with it his parents looked for a track in the area and came across HagerstownBMX. “On their website, we saw that they had loaner helmets, and you only needed pants and a long sleeve shirt, so we went to the track on one of their free practice nights. Everyone was so helpful, and for Gage’s first couple laps the track director’s son, Grant Raum, rode with Gage, giving him tips and encouraging him to pedal hard to make it up the hills. It was the end of the 2014 season — Gage was 5 and immediately loved the sport. We went to every practice until the track closed for the winter, and his top Christmas want was a ‘real race bike,’ since he was using a heavy box-store bike. 2015 was his first year of racing in the novice class.” 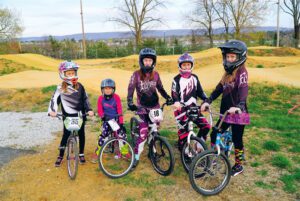 Gage’s sister Natalie, who is 9, saw how much fun her brother was having and now races as well. Ryan’s wife, Nici, says for her, the best parts of her kids’ involvement in the sport are that “BMX is a non-contact individual sport. And, you can decide how much you want to be involved. Practices are twice a week and races every weekend, but you can pick and choose the schedule that best meets your family’s needs.” But does she worry about injuries? “Yes,” she says, “but they wear safety gear, and from the start, they were taught the right way to ride. Surprisingly enough, the rate of injury of BMX riders is actually lower than other sports kids typically play.” Ryan also notes the exercise and hard work the kids put in every week to get faster. “They sleep better,” he says with a smile.

Parents also appreciate the sense of community at HagerstownBMX. Even though BMX racing is an individual sport, competitors support and root for each other. “What’s really neat is when a lot of riders from Hagerstown go to events away from our home track, say to qualifying races at the other four Maryland tracks. They set up a HagerstownBMX area where everyone roots passionately for our local kids,” Ryan says.

Anyone who wants to try the sport before investing in equipment can do so at HagerstownBMX. While a full-face helmet, long sleeves and pants are required, and knee and elbow pads are recommended, these items can be used for free at HagerstownBMX on a first-come, first-served basis. If someone wants to continue in the sport, there are ways to cut costs, Ryan says. “There is a huge market for used bikes, parts, and safety gear as riders are always outgrowing them. If you are new to the sport and buy used equipment, you could likely purchase a bike and helmet starting around $300.”

If a rider gets serious, he says,  “New entry-level bikes cost around $250, the higher-end complete bikes can cost well over $1,000. Many riders build their own bikes piece-by-piece so they are customized exactly to their liking. You want your equipment to be light.  With bike parts and gear, there is a correlation between weight and cost.”

There can be rewards, though, for success in the sport. Track Operator Timm Raum’s daughter, Ashton, is 21, and a junior at Lindsey Wilson College (LWC) in Columbia, Ky., on a scholarship for BMX — literally, a full ride. LWC’s “Blue Raiders” finished as national runner-up in the 2016 Collegiate BMX National Championships.

Ashton’s brother, Grant, 16, is a junior in high school and has already been offered a college scholarship for BMX. Timm’s youngest daughter, Lillian, was a Maryland BMX Champion before switching to speed skating.

Since being recognized in 2008 as an Olympic sport, BMX has grown rapidly, and now attracts thousands of riders to the 400-plus tracks in the U.S. HagerstownBMX is thriving as well, racing into an exciting future just as fast as its racers can pedal.

For more information on a trip around the track, visit www.hagerstownbmx.com, or you can find HagerstownBMX on Facebook.