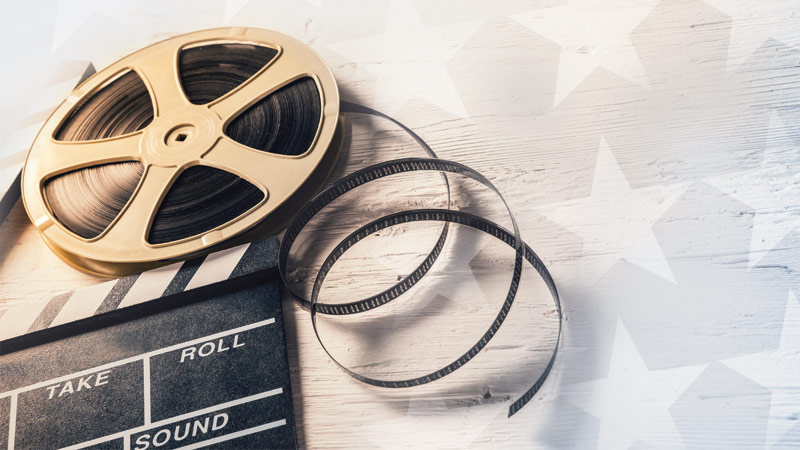 If life’s a stage, Hollywood actors Ann Mahoney and Kerry Cahill have put in their paces. On a recent afternoon, The Walking Dead and Terminator Genisys cast members showed 24 Barbara Ingram School for the Arts’ advanced acting students how to walk in their footsteps — one controlled movement at a time.

Inside the downtown Hagerstown arts magnet high school’s Black Box Theatre — an 80-seat black-painted playhouse flanked by deconstructed sets and racks of costumes — Ann, who plays Olivia on the hit AMC show The Walking Dead, introduced the students to the Suzuki Method of Actor Training, a yoga-like centering practice for actors to train body control, developed by Japanese director Tadashi Suzuki. Ann, who was dressed in comfortable black clothing, challenged the teenagers to tread steadily across the stage, punctuate their arms in pose, and hold their facial expression in a gaze as the song Funeral by Band of Horses played from a stereo. 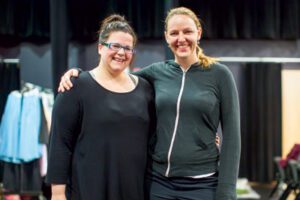 “Your knees are super bent the whole time,” Ann called out to the unflinching teenagers, as she wandered through their solemn parade. “It’s like peanut butter up to your knees — you can’t rip through it.” Ann, who also teaches the acting method privately and at Loyola University New Orleans, pushed down on the students’ shoulders to smooth their stride; she slacked and patted her own jaw to encourage them to loosen theirs, and studied their mournful gazes, occasionally nodding in approval.

After the exercise, she asked the students what they noticed. Their arms shot up in the air.

“It was very focusing; I felt very centered,” one student remarked. Another remarked, “I was surprised how easy it was to not move to the music.” One young man shared how he changed his breathing when he felt his body shaking; another young lady told the others how she straightened her posture when she felt too much tension in her face. Ann commented that she was impressed with the students, and added, “I saw a lot of humility and willingness to learn.”

Stripping It All Away

Openness (and the ability to memorize) are essential traits of an actor, Ann told the captivated group. “If you’re not willing to let people in, don’t be an actor. Because we’re not about pushing people away; we’re about letting them in — seeing all the gorgeous, joyful, terrifying, wonderful, dark things about us,” she said, projecting her voice over the crowd. Kerry — pitting her fists together at her chest as if huddling in a coat — said, “It’s like you’ve got a zipper on your rib cage and you gotta do this,” and shot out her arms and stood up, adding matter-of-factly, “or people won’t care about that character.” Ann added that while theater and film acting share a lot of traits, she believes this is even more important in film. “You’re really stripping away on camera. And that’s why people follow shows. They believe you.”

A hum and echo fell over the room as the students — mostly seated cross-legged, knee-to-knee and eye-to-eye with a partner — repeated mundane lines to each other like “I like cats,” and “You’re wearing a purple shirt.” One student served up a line, and the other attempted to fire it back the same way: same tone, inflection, and facial expression. 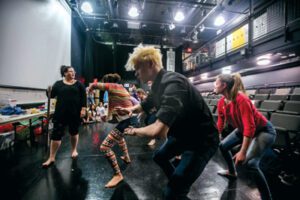 After the exercise, Kerry told the class, “The most we look into someone’s eyes is usually about three seconds — unless it’s a threat, or you’re in love, right? In film, you have to be able to connect to this immediately. Being present is key.” Kerry asked students to recall the actors in a heartbreaking scene from the film Good Will Hunting when Minnie Driver and Matt Damon are arguing, and Damon’s character breaks from the high emotion of the act to flatly say, “I don’t love you.” Kerry said, “You’ve gotta switch like that.”

Kerry proceeded to call two 17-year-old students, Jacob Epstein and Amelia Bickford, from their seats to join her onstage, handing them a script with only a few nondescript lines and began teaching the class how to create a character’s back story — the homework that must be completed before any audition. “Let’s make this up,” she told the class, calling on the students to pick the scene’s setting, the season, the year, the relationship of the two characters — encouraging them to make strong decisions about the role, and be specific. “The greatest thing about theater is that you can fall and nothing breaks,” Kerry reassured them.

Ann Mahoney didn’t attend an arts high school like Barbara Ingram; her education was rooted in the Louisiana public schools, and she received a bachelor’s degree in acting from Greensboro College and a master’s degree in acting from the University of Connecticut, where she studied the Suzuki Method. Ann said she was a disciplined kid, studying ballet for 12 years, and practicing acting longer. She decided to go to college to study theater at the encouragement of her high school speech and debate teacher. “If you’re going to do this, do this. Do it, and study,” she said. “Don’t be a hack.”

Ruth Ridenour, director of theater arts at Barbara Ingram, said she was relieved to hear the actresses emphasize how important training and discipline are to success. “These are things I tell them all the time, but for (the actors) to tell them that it’s hard work and it doesn’t always pay well is good for them to hear. All they see is the glamour. A college education is important for them to get the technique,” Ruth said.

Of the school’s 13 senior theater students, about five or six are planning to go to college to pursue a career in theater, she said. Ann, who got her first big break being cast in Frankenstein with Parker Posey in 2003, said her advice to aspiring actors is this: “Immerse yourself in training. If you love the craft, dedicate yourself to it. Learn about it, act, write, get on camera. Just stay in a place of humility where you’re willing to be open to life around you.”

Both Ann and Kerry, who have had several roles in TV and film, are Louisiana-based actors who share the same agent. The two were in Hagerstown for the fifth annual Maryland International Film Festival, which opened that weekend downtown, and agreed to teach the students and another paying class the day before the event, which featured Kerry’s latest film, Showing Roots.

Both actors told the students to walk into an audition knowing that the director is rooting for them, and to never limit themselves to a studio-provided character description. Over the years, Ann and Kerry have read for the same parts despite not looking alike. Kerry even added that she took a part that originally called for a 40-year-old black man. “You are enough. I am enough. We always want to be more, or bigger, or smaller. Just remember that you are enough to tell this story,” Kerry said, adding a sage bit of advice, “and be patient.”