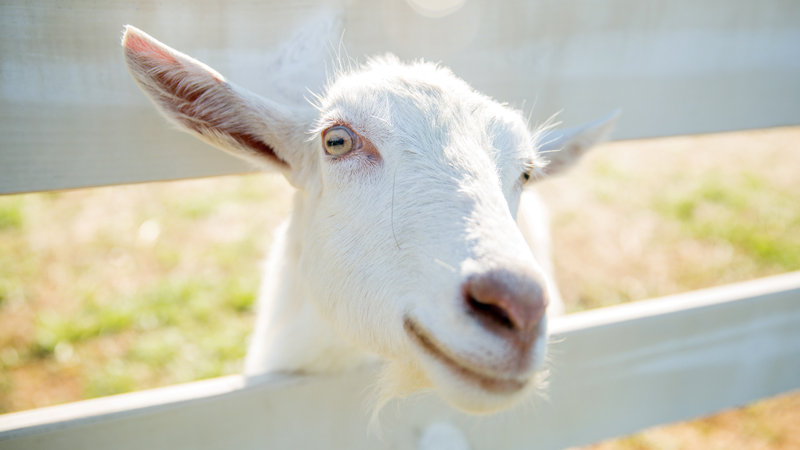 Whether it’s sprinkled on top of a salad, baked inside layers of lasagna, or melted on a pizza, most of the cheese products we consume are made from cows’ milk. But have you ever tried to use cheese made from goat milk in your dishes?

The folks at Caprikorn Farms — an award-winning Saanen dairy goat farm — published a cookbook last year chock-full of tasty recipes ranging from appetizers to desserts using cheese made from milk produced by their herd of goats. “My goal (for the cookbook) was to answer the question, ‘What do you do with this cheese?’” says Nancey Veldran, the farm’s corporate chef. “We hear it a lot — at demos, at events, at farmers markets. ‘What do you do with this besides put it on a cracker?’” 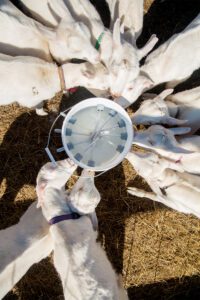 At 188 pages long, The Caprikorn Kitchen features recipes from Nancy, farm owner and co-author Alice Orzechowski, farm friends, customers, and employees, and chefs who regularly use their cheeses which include chevre, cheddar, sharp cheddar, feta, Gouda and jalapeño cheddar. “Our goal was to make recipes for the home cook,” Nancey says. “I’m not trying to write a cookbook for chefs. Frankly, most of us don’t use them.”

A large majority of the recipes have ingredients you probably already have in your home. The instructions are easy to follow for even those of us whose kitchen knowledge only extends to boiling a pot of water. “We’ve broken (the recipes) down into steps,” Nancey says. “I literally rewrote them so it didn’t sound quite as chef-y.”

The idea for the cookbook came about three years ago when they decided to include recipes for a grilled cheese sandwich and macaroni and cheese in their holiday boxes. Each recipe included in the book was taste tested and perfected by the authors and their families. “You know, a lot of times people, when we present them with cheddar made out of our goat milk, they can’t really tell at first that’s it’s goat milk versus cow’s milk,” Alice says. “The big thing is that goat milk has unique melting properties — you melt a cow’s milk cheddar and it congeals and gets oily. You melt a goat milk cheddar and it melts like a mozzarella or a provolone.”

Every book has a dedication, and the authors knew who would get the honor in their compilation. “We joked about dedicating it to our husbands because they are the ones who eat the food that we cook,” Nancey says. “We just looked at each other one day and said, ‘It has to be the goats,’ because without them we have nothing. …We are very bonded with the goats. They are our girls.”

Alice and her husband, Scott Hoyman, bought their Gapland-based farm in 1978. “Cows were too big, horses ate money, and pigs were…well pigs,” Alice says. The couple settled on goats. Since the two were each born under the zodiac sign of Capricorn — also a goat — that’s how they got the farm’s name.

Another farm had already registered their goat herd with the name Capricorn to the American Dairy Goat Association so they decided to spell theirs with a “k.”

Over the past three decades, the farm has become one of the top Saanen goat herds in the country. “We’ve been selling to dairies all over the world who look at our genetics and say, ‘Wow! We want to get that,’” Alice says. Breeding for milk production, they have shipped does and bucks throughout the world, including to Qatar, Trinidad, and Russia.

“I love kidding season…It’s a lot of work, but I love the little babies.”
Alice Orzechowski

They roughly have about 100 adult goats and 150 kids on the 13-acre farm. While speaking with Alice in mid-March, the farm was in the midst of a “baby blizzard.” “I love the baby goats,” Alice says. “I love kidding season…It’s a lot of work, but I love the little babies.” Getting to watch them just days after birth is a favorite pastime for her. “Baby goats, I swear, have springs in their feet,” she says. “They learn to jump and twist and do the happy dance.” 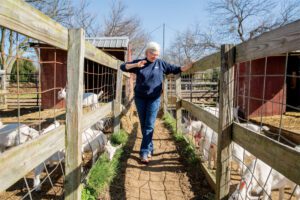 The adult goats are milked twice a day, but the farm does not make the cheese on site. “When we first started making cheese we wanted to make a raw milk cheese and back then it was illegal to do it in the state of Maryland,” Alice says. They got six different licenses to take the milk up to Pennsylvania to make the cheese and bring it back to Maryland to sell. The laws were changed recently, so the farm hopes to build a cheese-making facility on their property in the near future.

Alice is pleased with the response the cookbook has received so far. It can be purchased online through the farm’s website, or on Amazon. If you just can’t wait for the mail, copies are sold at Turn the Page bookstore in Boonsboro, The Common Market in Frederick, and at farmers markets and special events the farm participates in throughout the region. “It is really the first edition in a series of cookbooks, because we believe that goat cheese is something that everybody should have in their kitchen and be comfortable using beyond just sticking it on a plate and having it with a cracker or as an hors d’oeuvre,” Nancey says.