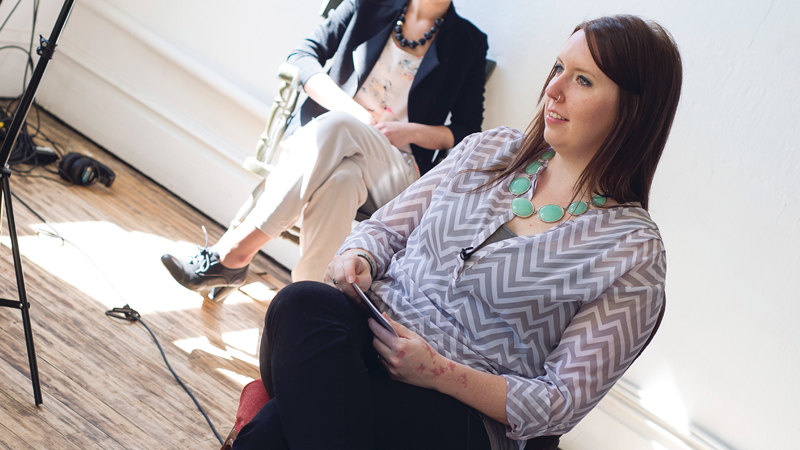 The Green Couch Project gives entrepreneurs a place to ‘spill their gutsy’ and inspire other risk-takers.

When Laura Wallace came across a lime-green microfiber couch at Value City back in 2012, she immediately fell in love, but practicality kept her from buying it at first. “I decided I didn’t really have a purpose for it, so we left — but I kept thinking about it,” says Laura, owner and creative director of Worx Graphic Design and founder of The Green Couch Project. “I always say, if you can’t stop thinking about something, then you should act on it. But when we went back to get it, it was gone, and they weren’t getting any more. And I’m like, ‘Um, I don’t think you understand. I need this green couch.’”

Unbeknownst to Laura at the time, her husband started calling Value City stores up and down the coast looking for another couch. “He found one — there was one left in a warehouse somewhere — and they shipped it down here, and here she is,” says Laura while seated on her beloved sofa, which is undoubtedly one of the most eye-catching features of her company’s colorful and cozy office in downtown Hagerstown.

Over the last few years, the lime-green couch has become more than just a place where Laura and her four Worx staff members can meet with clients and hold brainstorming sessions; it’s become a symbol of motivation for her and other entrepreneurs. “We’d been using the couch as a piece of furniture, but I always kind of had this gut feeling that it was supposed to be something else besides that,” Laura says. Following her gut, she founded The Green Couch Project in January 2014 to inspire other entrepreneurs to take risks and strive to fulfill their dreams. “I had this green couch that sort of took on a metaphorical form of where ideas blossom,” Laura says. “So one day I said, why don’t we start a forum where entrepreneurs can share their ideas, where they can share their emotions, the ups and downs, the sideways, the excitement?” Laura and her Worx staff created that forum using the green couch. 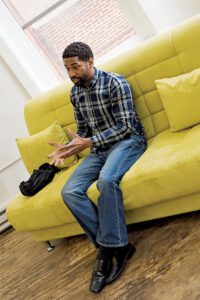 The green couch creates a safe zone where entrepreneurs can talk about the fear, anxiety, and other struggles they’ve faced. “It’s a nonconventional interview. It’s more like a good old-fashioned conversation,” Laura says. “I feel like people are more comfortable when they can grab a pillow and tuck it into them and just kind of lounge on the couch or sit however they feel comfortable, versus sitting in a more sterile environment.”

While the conversation is laid-back, Laura doesn’t give her interviewees the questions beforehand. “There’s no preparing, no time to craft perfect answers,” she says. “I want raw answers.”

“We’d been using the couch as a piece of furniture, but I always kind of had this gut feeling that it was supposed to be something else besides that.”
Laura Wallace

Francine Shaw, president of Food Safety Training Solutions, Inc., based in McConnellsburg, Pa., admits she was nervous about not knowing what to expect before her interview in 2014 — but she believes that made it a better experience in the end. “It’s more real and more honest when you have to answer the questions spontaneously,” she says. 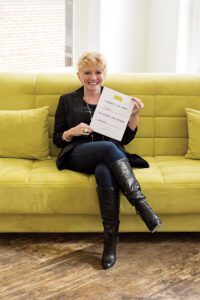 Through The Green Couch Project, Laura aims to encourage entrepreneurs to reflect on their experience and their accomplishments, and to rekindle their motivation. “Because in the world of entrepreneurship, it’s very easy to get wrapped up in your day-to-day obligations and forget the big picture,” she says.

In Francine’s case, being interviewed by Laura helped her remember why she started her business back in 2008. “I think the whole experience brought up a lot of things that I probably hadn’t thought about in a while,” Francine says. “And it took me back to the beginning and reminded me why I started doing this.” Laura also wants to show entrepreneurs that they’re not alone, that there are others out there facing similar challenges, “because it can feel kind of like you’re in an empty, isolated place when you’re an entrepreneur,” she says.

Koran Dunbar, an actor, filmmaker, and the founder of Rags 2 Riches Productions, which is based in Greencastle, Pa., felt reassured to learn that he wasn’t the only entrepreneur who’s experienced ups and downs — though he admits he found it tough to talk about his personal experience on camera. “It’s uncomfortable, because you don’t want to tell the story about your goal of starting this film company and how you’re sleeping in your car with your 18-month-old son — that makes you look like a bad parent,” he says. “But knowing that other people have sacrificed and have been down and upset shows me that I’m not as crazy as I think I am. Seeing that other people are going through what I’m going through kind of helps make sense of it all.”

“So one day I said, why don’t we start a forum where entrepreneurs can share their ideas, where they can share their emotions, the ups and downs, the sideways, the excitement?”
Laura Wallace

Koran says the experience also boosted his confidence — despite his initial nervousness about being interviewed. “Exposing yourself and your vulnerability is hard,” he says. “But I’d rather be criticized for being me than for being something I’m not, and I think The Green Couch Project really made me comfortable with telling my story.” 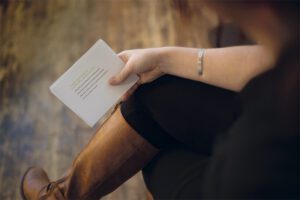 In addition to being interviewed, each entrepreneur who participates in The Green Couch Project fills out a “Pinky Promise” form, which states “I won’t allow _____ to stop me from _____.” Laura encourages her interviewees to keep these visible where they’re working to encourage them to keep their promises. For Laura, inspiring other entrepreneurs has become her own source of motivation. “I love to see people light up when they’re inspired,” she says. “It inspires me to continue on my path, because I’m one of them. I go through the same struggles they do.”

Hearing other entrepreneurs’ stories led Laura to share her own experience last year during The Green Couch Project’s event “Unfabricated,” where she was interviewed live on stage in front of an audience of around 100 people. “I felt like if I was asking other people to be vulnerable, I should be as well,” she says.

So far, Laura has interviewed more than 20 entrepreneurs, including Francine and Koran, and she has plans for another round of interviews later this year. “We’re always looking for nominations,” she says. “If you know someone who has an inspirational story and is willing to tell it, let us know.”

To learn more about The Green Couch Project and see the collective of brave entrepreneurs who have shared their stories, visit www.thegreencouchproject.com.