Local Artist Dan Murphy spins out imaginative and quirky projects by the dozen.

Dan Murphy has some odd ideas floating in his head. You can gather this much by his stinkbug-emblazoned notepads and coasters sold in gift shops, and the AllTerrain Treehouse in his backyard, which is a near spitting image of the two-legged walker used by the Galactic Empire ground forces in “Star Wars.” But Dan’s got a more reserved side too, seen in his fine art that hangs in a few Maryland galleries.

The TV producer-turned graphic designer-turned illustrator and painter is a stay-at-home dad, which gives him time to play with his kids (the AllTerrain Treehouse venture was created with this in mind) while working to make a few bucks that he hopes will turn into a more robust livelihood this year. If things continue to shape up the way they have been, he may be on his way, as he’s got some interesting projects lined up in addititon to the paintings and drawings he has hanging in Boonsboro and Greencastle, Pa., galleries with subjects ranging from historical sites to a painting of a side of a warehouse with a Coca-Cola ad on it.

“This year is going to be a big one, and it looks like I’m going to be doing more fine arts,” he says. Dan has also been selling his notecards locally and online, and pumping his book illustrations at signings. He’s also engrossed in a project for Sharpsburg resident and author Nora Roberts to promote her books. He is painting detailed book spines representing Nora’s work, and he’s printing reproductions of them to brandish the risers on the steps of Turn the Page Bookstore and Gifts Inn BoonsBoro. The project will look like a stack of books with the spines showing on the face of the steps, he says. 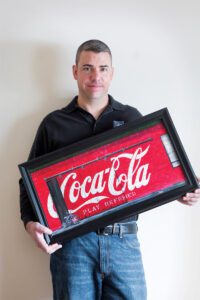 With an associate’s degree in Visual Communications from Frederick Community College, Dan had a stint as a graphic designer and producer at Cable 10 in Frederick. “[In TV] It’s the same rectangle of dealing with images and pulling people in visually through editing and graphics,” he says.

He later moved into printing, preparing files that came from designers. “I got to see the bells and whistles and ‘magic’ behind the scenes and learned how to make everything come together,” Dan says. In business for himself now, he wears all the hats — concept developer, marketer, and customer service guy. And he’s branched out into areas like acrylics and pen and ink sketches.

Now, it’s the details that intrigue him; enough so, that he will spend hours re-creating an object like a stopwatch. “I like that you can appreciate it from a distance but step closer and see more and build the image by making patterns on top of each other to create depth and other detail.” And it’s those details that often lead him down uncharted paths. Dan likes making statements with odd little details, as seen in his stinkbug notepads with the infamous creepy-crawlies imprinted on them with the words: “Forgetting stinks.” He’s also made stinkbug stickers for places like refrigerator doors. “I wanted to make something fun, or something freaky,” he says.

“This year is going to be a big one, and it looks like I’m going to be doing more fine arts.”
Dan Murphy

An environmentalist to the core, Dan also wanted to bring attention to how these insects got here. “They escaped from a container shipped from Asia that was opened in Pennsylvania. The stinkbugs inside were uncontrolled because there were no natural predators. They went nuts. They eat corn, cotton, and fruit. So this was a chance to call peoples’ attention to what can happen when we want to save a buck to import from Asia,” he says.

Being environmentally conscious rings through many of Dan’s projects. The backyard treehouse he has been working on is made of recycled materials, while being one of the kookiest and perhaps more elaborate of his projects. It was inspired by the mutual interest he and his son have in rescuing and reusing what otherwise would be tossed in the garbage — not to mention a common enthusiasm for a certain 40-year-old sci-fi film series. “My son and I have watched all the ‘Star Wars’ episodes, and both of my kids wanted a clubhouse. So I said let’s make a really cool one,” Dan recalls.

The 13-foot-6-inch tall structure is made of practically everything you can think of, from old pool filter parts to a sink bowl. The leg joints are made of wheels and old hubcaps. And the structure built from trash has just a little bling: bright LED lighting. It’s a year-and-a-half work-in-progress. “I am creating it out of my head. I don’t have a kit. So I have to decide how to put the pieces together,” Dan says. 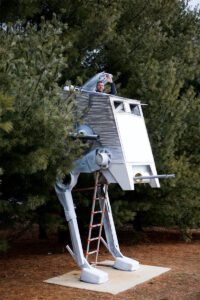 Dan Murphy with the Murhy‚Äôs All Terain Treehouse, or MATT, modeled afte the AT-ST Scout Walker from Star Wars Empire Strikes Back.

While keeping in mind the bottom line, Dan also stays faithful to what his often unconventional brain tells him. “My art is not for everybody.

I realized this once I started doing

it to make a living. But I will keep doing what makes me happy,” says Dan, who started doodling in grade school, or maybe earlier — he recalculates, recalling his mother salvaging something he’d sketched on a placemat then tossed. She stashed it away for him so he could remember his earliest work.

In between “play time,” he has focused on his commissioned work, including illustrations for a Civil War book about a gravedigger and that worker’s homage to Clara Barton. Now published, that project led to a second, and now third, book in a series by author Kenneth Postalwait.

He will continue to focus on environmental issues this year, especially recycling. He’s planning to sell art from repurposed materials, mainly electronic scraps, at this coming spring’s Boonsboro Green Fest. Beyond that, he says, “I have lots of ideas in my head, and I want to get them out and share them. It will be awesome if I can make a living at it.”

From His Mind To Yours

To check out some of Dan’s creations,
visit www.dmdesigns.co.
And you can follow the progress of the AllTerrain Clubhouse at his dedicated Facebook page.

Dan Murphy works on a project in his home studio. photo by Jason Turner