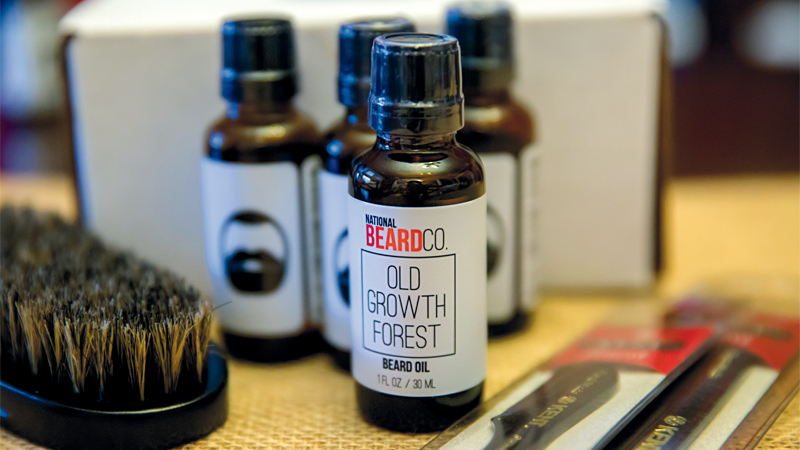 Attention serial shavers of Washington County: Thomas Dasch and Daniel Runkles know your pain. It’s a common problem. You’re trying to grow a magnificent facial pelt and before you can give Wyatt Earp a run for his money, you’re suffering from itchy skin and a dry, wiry beard. Plus, the wife isn’t too thrilled about receiving kisses from a Brillo pad.

That’s where these guys come in. Thomas and Dan met in elementary school, and in spite of several cross-country moves in childhood and adulthood, have remained close friends. They also like sporting a little facial hair.

Dan’s reasons are rather utilitarian. “When I was old enough, I grew facial hair more to try and speed up my morning routine and avoid shaving than anything else,” he says. Thomas, on the other hand, seems to be a descendant of Paul Bunyan. “I was blessed with the genes of a gorilla,” he says. “My 5 o’clock shadow can start at half-past noon!”

They both ran into the same problem early on, though. “Growing a beard for me has always been natural and easy,” says Thomas, “but keeping it was something different. Lots of men — myself included — can’t keep a beard due to itchiness and dryness. The itchiness comes from the coarseness of the beard hair and the dryness of the skin under the beard.” Giving in to the temptation to have a good scratch can result in the dreaded “beardruff,” the dandruff-like white flakes that are especially noticeable on a black shirt. 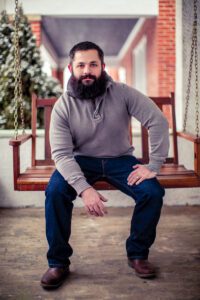 “I stumbled upon beard oil while searching for something to help,” says Thomas. And while these worked, the overall packages were less than desirable. “The stuff we bought and tried first wasn’t that great,” says Dan. “Not a great scent, kinda heavy and greasy. Then Thomas had the idea to create our own. We’ve often talked about trying to start a business together, but honestly, I wasn’t on board at first. My past experience is more info tech than health and beauty.” But Thomas was convinced he’d found an unsatisfied need in the market of men’s grooming and he was determined to fill it. His zeal eventually ignited an interest in Dan and the National Beard Company came to life.

Research was the first order of business. “I started to explore in-depth how beard oil is created,” says Thomas. “My journey started with learning about carrier oils, essential oils and their properties and traits. [For those of us not in the skincare industry, carrier oils are non-volatile, nearly odorless oils that act as a base for the highly scented and less stable essential oils; in effect, they “carry” essential oils.] I had to figure out what carrier oils I wanted to use based off several properties: ability to moisturize hair and skin, shelf life, color, scent, and ability to find certified organic. Through trial and error, I settled on organic jojoba and argan oils. These oils have a long shelf life, moisturize skin and hair really well, and don’t leave an oily feeling after applied.

“With the carrier oils chosen, I then had to focus on the essential oils,” he says. “Essentially, I had to become a perfumist! One might think you could add a little of this and a little of that and come up with something that smells good. [In theory], that’s possible, but more often than not it doesn’t work that way, or you get a scent that doesn’t last longer than 30 minutes.

Soon after, we were fortunate to have an amazing barbershop and men’s style business called Citizen Frederick start selling our beard oil, and they’ve seen a lot of demand.
Daniel Runkles, national beard company

I had to learn about the “notes” of the essential oils, their strengths, dilution rates, and synergy. Testing became an obsession of mine.”

The National Beard Company currently offers beard oil in five scents and one unscented option: exotic spice, lemon zest, mulled citrus, old growth forest, tea tree mint, and clean slate, which is the unscented option. “I’ve used a wide assortment of essential oils in various combinations to get the unique scents for each of our products,” says Thomas. “Some of our oils have as many as six different essential oils combined to give them their scent profile.” The development stage lasted 10 months, and Thomas estimates he created 150 samples before formulating the five he liked best.

Thomas and Dan initially sold the oils exclusively through their website, www.nationalbeard.com. “Soon after, we were fortunate to have an amazing barbershop and men’s style business called Citizen Frederick [in Frederick, Md.] start selling our beard oil,” says Dan, “and they’ve seen a lot of demand.” 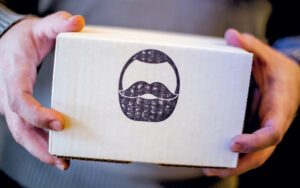 Business has been booming for these two long-time friends, and they’ve got plenty of plans for the new year. “For 2016, we’d really like to start attending more events.” says Dan. “We did several in 2015 and really enjoyed them. Selling online, you don’t get to meet your customers like you do at events. Consumer response has been great! Lots of guys have never heard of beard oil and have just dealt with the annoyances of a dry, itchy beard. We’ve had a lot of customers reach out to us to share their satisfaction, not just with the relief of dryness but with the scents as well.”

In addition to the six scents, the National Beard Company sells high-quality beard brushes and combs. Plans for new scents are already underway, and the guys are actively looking for new retailers in the tri-state area to sell their unique wares. As Dan says, “We really want to get our beard oil into the hands of as many suffering guys as possible!”

No need to retreat from what manhood has endowed you with. Confront it head on with a silky smooth sheen free of the perpetual dry and itchy scruff. The beard oils offered by National Beard Company range from $22–25, and shipping is always free to anywhere in the U.S via first class mail. They even offer a 30% money back guarantee. For more info, or to order up, check ’em out at nationalbeard.com.