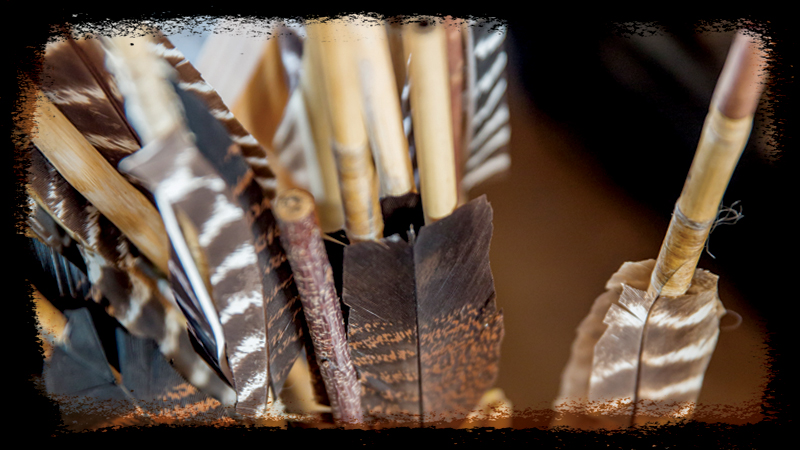 The North American Bushcraft School reunites students with the sustainable, primitive lifestyle of our ancestors.

Most people who drive the curving roads of the Eastern Panhandle to the cut in the Hedgesville, W.Va. woods where the North American Bushcraft School sits are looking to reconnect with nature, says Jason Drevenak, who has been the school’s president and lead instructor since its inception three years ago. For Jason — who grew up visiting his homesteading grandparents at the 138-acre property — the school is a preservation of his ancestors’ sustainable lifestyle, along with a hope that future generations will plug back into earth.

“I would come up here on weekends and holidays and for a couple weeks in school to stay with my grandparents — not to learn, just to be exposed to it,” Jason says. “That’s pretty much how this all began — watching how they lived.” His grandfather, George, dug a pond on his land and stocked it with bass and bluegill, and hunted wildlife, he says. His grandparents made their own instruments; they canned, pickled and salted vegetables, and made wine, too.

Jeff Moore, a survivalist instructor who serves as coordinator of the Central Appalachian Bushcraft Society — a club of primitive skills enthusiasts that merged with the school, says, “My view on it is it’s a shame that we’ve gotten away from these skills. People in more rural areas have kept these skills alive out of need. It’s neat for me to see people from urban backgrounds wanting to learn this and keep this going.”

Today, Jason and a team of instructors, including his wife, Sera, teach classes nearly every week on the property, which has drawn about 2,000 students and visitors to its remote corner of the world. Here they learn how to make fire, knap stones, identify edible plants, tan hides, and make primitive art, clothing, mead, soap, buckskin bags, and moccasins — among a long list of other since-forgotten crafts. They hold festivals on summer weekends, weeklong workshops for professional outdoorsmen, and hold camps for area home-schooled students. 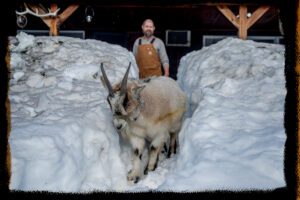 The popular “Primitive to Prepper” event on April 2 and 3 will draw more than 100 vendors, a regular crowd, and a growing number of curiosity seekers looking to learn basic re-wilding skills, Jason says. Eventgoers camp, play music, and share stories and a little moonshine overnight. “Most of the clientele are people who are interested in having a softer impact on the planet — a great hippy-dippy crowd that comes to hang out with us,” Jason says. “We have some people on the disaster side of the house who are waiting for the zombies and aliens to come down and take over. We also have some people who have always wanted to try this, but didn’t know where to find classes to learn.”

Max Spangler was one of them. The 57-year-old Markham, Va., resident, says she was looking to “counterbalance decades of sitting at a desk” through hiking and kayaking before finding the school and taking classes that opened her eyes to the process of dressing a deer (a class she highly recommends), and fermenting food and making pine-needle baskets.

“People in more rural areas have kept these skills alive out of need.“

“All of these skills help ground me and contribute to defining and clarifying my sense of purpose, direction, while increasing my appetite for more,” Max says. “I have gained a sense of self-sufficiency and learned ways to practice being in a community that were previously absent in my life.

After graduating from high school in Germantown, and serving as a combat medic in the Army, Jason says he realized he wanted to get back to nature. He and Sera were living in western North Carolina and managing a large primitive skills and survival school when they decided that they wanted to do things their own way, and turn people onto sustainable living. “We needed a substantial amount of land near a city where we would have a client base,” Jason says. “My grandparents’ property was for sale, so I contacted members of the family who owned parts of it, told them I wanted to turn it into a school, and just purchased the entire tract. It fell right into the place of what we wanted to do.”

Jason says that they retain moderate connection to the outside world — they use their computer to work, stream television shows and movies, and listen to satellite radio. They spend their days working and teaching outdoors, or at the cabin that sits at the heart of the property. The couple maintains a coop of chickens and ducks, and eggs, as a result. Though they no longer hunt, most of the venison they eat is harvested from roadkill, he says.

When Melissa Mastrangelo noticed the sign for the school tucked along the road to her Hedgesville, W.Va., home, she says she was instantly drawn. The Mastrangelos’ five children — ranging in age from 5 to 12 — are home-schooled nature lovers, and Melissa says she was looking for a summer camp for them. “We’ve always had this draw to primitive — the leather, the tradesman. When I saw that sign, I thought, ‘Wow! What is that?’” she says.

Her family had made traditions out of traveling to primitive festivals, including the annual Fort Frederick Market Fair, where they usually dress in period costume. They also work together to harvest their three-acre land — brimming with more than 100 blueberry bushes — that sits about a mile away from the school. She promptly sent her two boys, Joseph, 12, and Anthony, 11, to the school’s Camp Adena, where they learned fire making, flint knapping, and water purification, and slept overnight in a teepee — a shelter they had made under the stars, she says.

Melissa notes that Jason has taught her boys — and her family that attends all of the festivals there — to “just listen and be here, and work as a community. It’s getting back to the earth, and living and being quiet and walking through the woods, and being aware.” Her boys now regularly help Jason around the property, splitting wood, feeding animals, mulching and building, she says. Her husband bought a drum because the couple had fun at a festival playing in a drum circle. “I have seen us evolve. The kids are excited — it’s opened them up,” Melissa says. “It’s sparked a lot in our family. We were always like that, it’s just sparked a light in our path.”

“If I go out into the woods, I’m still bringing a lighter with me, but if I lose my lighter, I know I won’t be in trouble.”

Though the Mastrangelos were never heavy on electronics, Melissa says her boys now spend their spare time working on primitive crafts, keeping her busy looking for pig brains (needed to naturally tan hides) and buying leather for bags — some of which they’ve traded at Bushcraft festivals, and others they’ll sell at Fort Frederick Market Fair’s primitive society campsite later this year. “It’s a full circle — my kids are not just going to an event anymore, they’re mastering the skills for the next generation,” she says.

Before signing up for his first primitive skills class a few years ago, Ryan Rice spent his time away from work as a Trader Joe’s crew member camping, hiking, hunting, and watching television shows like Survivorman with Les Stroud. Now, the 32-year-old Wilmington, Del., resident — who has learned everything from making primitive hard apple cider to making gourd bowls through classes taken at Bushcraft and beyond — regularly makes the three-hour trip to the Hedgesville school to connect with friends, and teach plant-based dyes. This craft he describes as a “very experimental” art has Ryan hooked, and scouring thrift shops for clothes to transform.

“The land where that school is…there’s something about it. When I’m there, I feel very peaceful. It’s my happy place,” Ryan says. The former Boy Scout says that his confidence and appreciation for the outdoors has grown even more in the years since he’s joined the primitive movement. “This has added an extra layer of knowledge,” he says. “If I go out into the woods, I’m still bringing a lighter with me, but if I lose my lighter, I know I won’t be in trouble.”

Ready to see what life was like before mass-production and hunting superstores? The North American Bushcraft School has classes ranging from the basics of friction fire to wilderness philosophy classes and knife making. For a rundown of all the events and classes, check out their website at www.northamericanbushcraftschool.com.