A Tiny Approach to Living Large 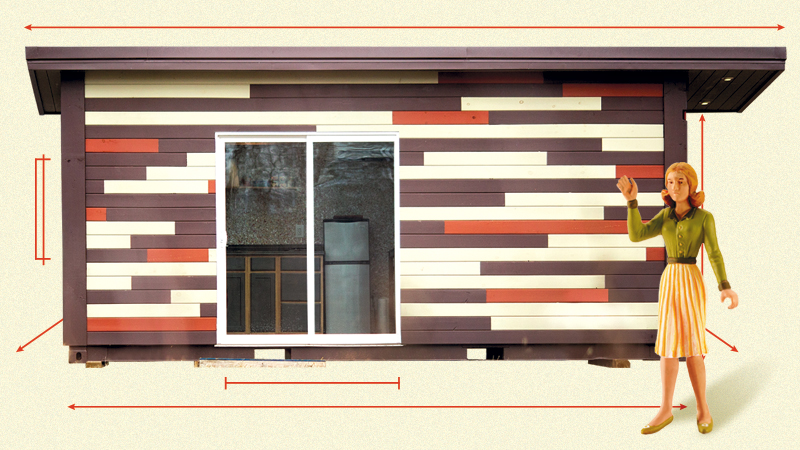 If you watch television or use the Internet, you’ve probably heard about tiny homes. These small and sometimes meticulously crafted, but often spartan, houses have inspired quite a following — some say a movement — in recent years. Homes designated as tiny can range in size anywhere from a measly 65 square feet to around 500 square feet — depending on whom you ask — yet they still feature many of the same amenities, including bathrooms and kitchens, as an average-size house.

So what’s the appeal of cramming all the kitchen appliances and other stuff you would normally fit inside a typical home into such a small space? For some, cost is the main driver behind the desire to live in a tiny home; for others it’s a goal to live more simply and sustainably; and for others still, movable tiny homes, like those on wheels, allow them to live comfortably while still offering the option to pick up and move whenever the need or desire arises.

It’s an interesting concept when one considers that in 2014, the median size of a new single-family home sold in the United States was 2,506 square feet, according to data from the U.S. Census Bureau. Here in Washington County, the average new home is 1,500 to 2,000 square feet or more, according to Terry Wishard, a longtime builder and one of the founders of Container Homes of Maryland, a Hagerstown-based consulting company that coordinates the construction of homes using decommissioned shipping containers.

While the tiny homes movement hasn’t made an impact in Washington County quite yet, there does appear to be looming growth for the niche industry in our area. The Washington County Permitting Department has received a few inquiries from area residents about how small a house is allowed to be, as well as what the rules are regarding converting storage buildings into dwellings, according to Angela Smith, deputy director and deputy code official for the department. That tells us there are at least a few local folks intrigued by the idea of living in small spaces. 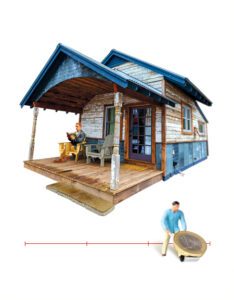 Terry’s interest in tiny home building happened by accident around four years ago. “I had caught on to shipping container home building through Facebook, and in the process of all that I stumbled onto this tiny home thing,” he says. “I was kind of taken aback by it because it’s so simple. I wondered why more people weren’t doing it.”

Two years later, after extensively researching container and tiny home building, Terry co-founded Container Homes of Maryland. Since then, the company has been working to bring his ideas to life. Last year, the first display shipping container home was finished, and is available for showings by appointment near Boonsboro.

The 160-square-foot dwelling, which is movable by trailer, features custom-painted tongue-and-groove pine siding on the exterior, as well as a corrugated metal roof. A sliding glass door leads inside the structure, where visitors will find a kitchenette with a full-size sink, a gas-powered range, and a small refrigerator; a table/desk with two stools; a custom-made full-size bed with drawers underneath for storage; and a small bathroom that’s designed to be a “wet room” with an all-in-one sink and shower area plus a waterless packaging toilet. A 4-foot-by-4-foot skylight and large bay window allow for plenty of natural light in the home, which also features recessed LED lighting on the ceiling. The small space is heated and cooled quickly and efficiently by a ductless mini-split heat pump.

In addition to the tiny container home, Container Homes of Maryland also offers a tiny house on wheels designed by Krate Solutions — a drafting and design company based in Ohio. Container Homes of Maryland’s construction partner, I Can Build It, also can build custom tiny homes for clients. “I always tell people that imagination is the only limitation when it comes to homebuilding,” Terry says. “You don’t have to stare at it on the Internet anymore — there’s a guy right in your backyard that can do it if it’s something that you really want.” 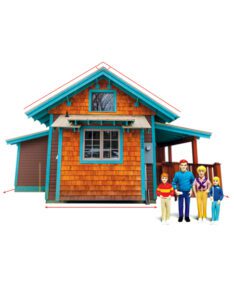 There seems to be two age groups driving the tiny home movement: younger adults without children and senior citizens. “Seldom have I ever seen anyone interested in the tiny house movement when they were middle-aged and had a house full of kids,” says Al Cobb, president of PanelWrights, a distributor of energy-efficient structural insulated panels (SIPs) based in Shenandoah Junction, W.Va. Two years ago, Al built an approximately 225-square-foot model tiny home outfitted with SIPs on his Jefferson County property and held a workshop in 2015 to teach others to do the same.

For some people, a tiny house can mean financial freedom, as the total cost of a tiny house is often just a fraction of the cost of a larger home. Younger people who are looking to buy their first home are particularly interested in tiny homes because of the cost-saving benefits, according to Jon Gandy, one of the co-founders of Container Homes of Maryland. The total cost to build and place a dwelling like the company’s tiny container home demo, including hooking it up to existing utilities, is $35,000, for instance. “For a lot of people, that’s a car payment — you could pay it off in three years,” Jon says. “So essentially a young person could be mortgage free and have a place to live.”

The ability to be mobile, as many tiny houses are on wheels or easily movable, is another benefit for younger people who might still be in college or just starting their careers and know they probably have several other jobs ahead of them before they settle down, according to Al. “Then at the other end of the age spectrum you’ve got people who are empty nesters, retired couples, or single people who don’t want the hassle of a big house and a lot of upkeep,” he says. “They don’t want a big mortgage — they want to be able to pay for it 100 percent, and after they’ve paid their $30,000, $40,000, or $50,000, they own it outright and off they go.”

People of all ages turn to tiny home living out of a desire to be free from all the material things that the average person tends to accumulate in a lifetime. “We get contacted all the time by older folks who are downsizing,” says Sue Thomas, who owns Hobbitat, a tiny house building company in Oakland with her husband, Bill. “They want enough room for their grandkids to come stay — maybe up in the loft — and they want a main-floor bedroom, but they just don’t want all the stuff they had before.”

The younger generation of tiny home enthusiasts has a similar mindset. “I’ve always lived by the saying that the freest man in the world can carry all his prized possessions in a bag on his back,” says Sean Mastej, a 27-year-old who works and currently lives at the Blue Moon Rising tiny cabin vacation rental community near Deep Creek Lake in Garrett County.

Sean is no stranger to living a minimalist lifestyle, having spent last summer living on his short, biodiesel-powered school bus that’s sparsely equipped with a sink, a propane stove for cooking, a table with booth-style seating, and a queen-size bed that folds up into a couch. When the bus’s lack of heat forced him to look for other housing options during the winter, he gladly moved into one of Blue Moon Rising’s 14 tiny cabins, which were built by Hobbitat.

The approximately 250-square-foot tiny cabin Sean is staying in is “like a mansion” compared to the less than 100 square feet of living space on the bus, he says. The two-person cabin features a sleeping loft; a full bathroom with a shower, as well as an outdoor shower for warmer months; and a kitchenette with a miniature refrigerator, an induction cooktop, a toaster oven, and a French press to make coffee. Though Blue Moon Rising’s cabins are meant for use as vacation homes rather than for full-time living, Sean has no issues with his current setup. “I definitely have everything I need for me and my dog,” he says, and adds that he plans to move back into his bus once the weather warms up.

Aside from Sean, no guest has ever stayed longer than a week at Blue Moon Rising, according to Rob Vanderbilt, general manager of the vacation community. But plans are in the works to build a dozen tiny houses on the property for long-term rental in the future. “I would say 30 to 40 percent of the people who visit Blue Moon Rising do so to get a taste of tiny home living,” Rob says. “They want to see what it’s like. They want the experience.” 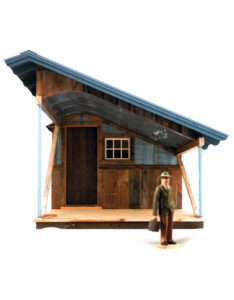 Of course, a few days spent living in a tiny home is vastly different from what it takes to live in one on a permanent basis. Tiny home residents face challenges, such as having to drastically decrease the amount of stuff they own. “They recommend that if you’re going to go tiny, depending on your square footage, of course, you should generally be able to fit all of your belongings into something about the size of a large Rubbermaid storage container,” Terry says. “Tiny living is about only taking what you need — it’s almost borderline survivalist at times. You only carry what you can handle, and what you absolutely have to have.”

Aside from fitting all your stuff into such a small space, living in a tiny home has other obstacles to overcome, including compliance with county and municipal building codes and zoning regulations, which can vary widely from place to place. “There are certain requirements that must be met in order for structures to be habitable in Washington County,” says Angela, the deputy director of the Washington County Permitting Department. For instance, at least one room in a dwelling must have at least 120 square feet of gross floor area. “But we look at a house, whether it’s 480 square feet or 8,000 square feet, as a house,” she says. Homeowners association rules, which may prohibit houses under a certain square footage, also must be taken into consideration, Angela adds.

And what about those who want to build a tiny home, say, for a relative to live in, on the same property as their primary residence? Washington County’s zoning regulations forbid two primary residences on one property, according to Angela, but it is possible to build a second house on a property if you request a special exception from the county’s Board of Zoning Appeals.

Despite the challenges of building a tiny home, Terry and Jon are confident that come spring, they’ll be seeing plenty of clients interested in tiny houses and shipping container homes. “We already get around three to five calls a week just for container building, and quite a few of those have been people asking about tiny homes,” Terry says.

Check out these tiny home consultants and builders in our area and beyond.