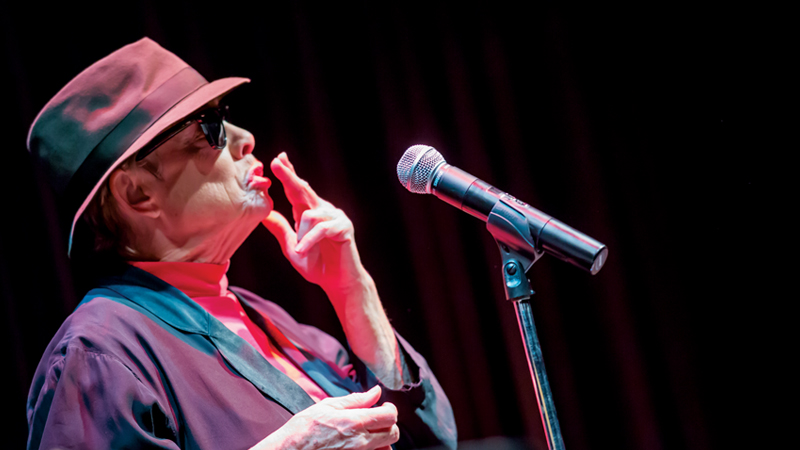 The new Black Box Theatre at Barbara Ingram School for the Arts offers the chance for growth in multiple ways.

Dale Stein tells her Barbara Ingram School for the Arts theater students that studying a script or running through a rehearsal is a straight line — but performing a show for an audience is a circle.

At the downtown Hagerstown arts magnet high school, that circle is drawn around its black box theater, where “a conversation” between the school’s 295 students and the community is showcased through various plays, recitals, rehearsals and discussions — open to the public for $5 a show, says Dale. “There’s a place for young people who are our emerging leaders to explore this conversation in this way — this very unique and very exciting way, and I’m not sure everybody knows it’s just down the street — down the street, this is happening!” she says.

It’s why The Barbara Ingram Foundation rebooted its Black Box Chair Campaign, inviting prospective donors to “have a seat,” and sponsor one of the theater’s chairs for $1,000, says Mimi Dickinson, the foundation’s executive director. So far, 13 of the theater’s 80 seats have been sponsored, according to Mimi.

“What’s special about this fundraiser is that everyone can have a piece of this classic theater in downtown Hagerstown, have their own chair in that theater, and their name on a plaque outside the theater,” says BISFA Principal Robert Hovermale.

The black-painted playhouse was built from the framework of the former Henry’s Theater stage, which served as a movie theater, dinner theater, and boxing ring over the years before the school was built around it, Principal Hovermale says. “It’s the only performance area in the school — outside the dance floor,” he says. “It’s really set up to be a learning space and a performance space that is very flexible, where they can really use their imagination.”

Against the blank black canvas, budding thespians practice improvisation, stage intimate shows, and construct sets; writers hold poetry readings and artists hold rehearsals, recitals, and discussions. “In most schools, you’re lucky if you have a good auditorium, and this is a professional performing experience,” Dale says. Mimi adds that the black box theater was filled over winter with costumes and sets for the school’s “Little Mermaid” production at The Maryland Theatre, which opens April 15. She hopes to book an artist to perform at the school’s black box theater after graduation.

The $80,000 the foundation hopes to raise through the campaign will go to the school’s endowment, and to pay for more adjunct teachers, speakers, and programs, including the school’s Summer Arts Academy, Mimi shares. “We focus on raising funds and in-kind donations to support and maintain arts education in the county and to enhance their experience at Barbara Ingram.”

In its six years, the South Potomac Street school has nearly reached capacity, spreading to five buildings downtown, and prompting the foundation to reboot the black box theater fundraising campaign to support the school’s ongoing and growing enrichment programs, Mimi relays. “The arts do not always get the money that it needs to do what needs to be done,” she says.

Though it’s a public school, the foundation supplements government funding by paying for enrichment grants, which teachers seek for field trips to major performances and exhibits like the ones students have attended in Washington, D.C., and New York. “It’s part of our mission and vision to continually grow and be there for as many students who want this service,” Principal Hovermale says. “We’re turning lots and lots of kids away who want to go here.”

And of those students who do find a place at BISFA, many of them walk or skateboard miles to get to school, and 24 percent of the students receive free and reduced meals, Mimi says.

Dale, who is an adjunct teacher who has taught creative writing and theater at the school, performed the one-person show she wrote, “A Fresh of Breath Air,” at the black box in November for the fundraising campaign’s kickoff event.

She’d performed that show in New York City — where she lived for nearly two decades — and along the East Coast. As a Hagerstown resident, Dale learned of the arts school downtown, and wanted to be a part of it. “I’m giving back now. I’m teaching. I’ve had a long life in theater and I can share something with these students that I hope is useful, and puts them ahead of the game,” she says.

Laurie Bender sponsored one of the black box theater chairs in honor of her children. Laurie’s daughter, Elli, is a Barbara Ingram graduate, and her son, Matthew, is a Barbara Ingram freshman who is concentrating on theater tech. Matthew helped with lighting for a production of “Forbidden Broadway” at the black box theater in the fall, and Elli performed in various theater productions there. “I thought this was a natural thing for me to support,” Laurie says.

“It just brings out so much in them,” Laurie says of the school. “Confidence is the hardest part of growing up — especially in high school — and I feel they’re getting that years ahead of other kids through this program.”

Principal Hovermale adds that the community has the opportunity to watch that growth right on stage. “The whole school is a personalized school and that’s kind of the way the black box is —you’re almost part of the performance in the black box because you’re that close,” he says. “It’s a very personalized experience, just like the school.”

For more information on sponsoring a chair at the black box theater, visit their website here.
To keep abreast about upcoming performances at the theater, click here.