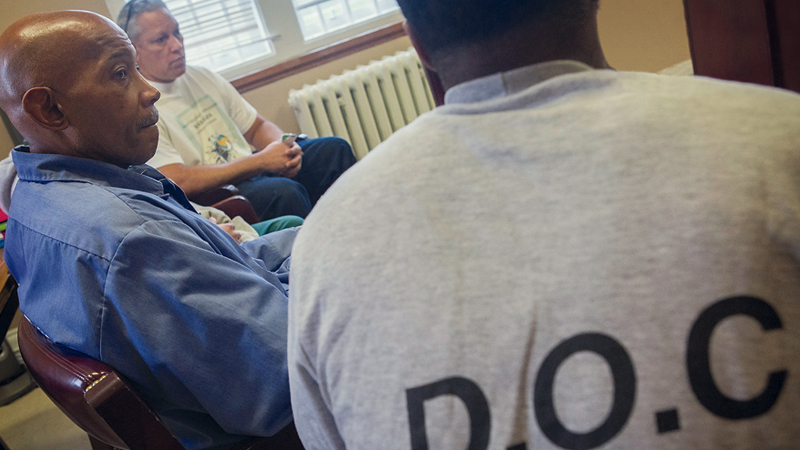 The GED and vocational programs at Maryland Correctional Institution in Hagerstown equip inmates with the tools to avoid a return stay.

“I ran into one of my former students,” recounts Vernell Doyle, “and he told me how thrilled he was to have obtained his GED degree. He was no longer a high school dropout — his image of himself had changed for the better.” Vernell was one of his teachers when he was an inmate at the Maryland Correctional Institution — Hagerstown (MCIH). With this degree, the student — who shall remain nameless — was able to leave prison and go out in the community and find a job.

MCIH is more than just a prison; it provides an academic education for those incarcerated, leading to a GED, as well as vocational education with training in various career options. “Our students are extremely dedicated,” says Jack Bentley, principal of the education program. “They want to learn and our teachers have a captive audience.” Some 350 inmates — out of an overall population of over 2,000 — study everything from literacy to computer skills.

Once inmates have attained their GED, they can then go on to occupational workshops to learn the skills necessary to work with sheet metal, upholstery, and carpet. Attending the classes can help keep your mind off where you are, stay on a schedule, and keep positive, says Jack.

An Aspect Of Normalcy

With its coils of barbed wire, metal detectors, bars everywhere, constant surveillance, and an impressive stone edifice built by inmates in the 1930s, MCIH can be quite intimidating — for prisoners and visitors alike. Nonetheless, within these walls, some 10 classrooms spread over two floors form the education center. Here, students receive daily instruction in typical classrooms with a teacher at a desk in the front, and students poring over their work at individual desks. “The curriculum we follow was developed with teachers and academic advisers, and the teachers are certified through the Maryland State Department of Education. In some cases, they build relationships with students — helping them realize the importance of education and what they can do with their lives,” says Jack.

Heading the occupational program is John McKay, who has been with the MCIH for 35 years. In his shop, he works with about 15 students. He is doing what he likes — working with his hands, and helping his students to believe in themselves, he says. “Some of the students are really interested, others take the course just to pass the time. I remember a couple of them who thought they could not do the work.” He spent time with them, and after graduation they thanked him for his persistence. “We all can do more than we think we can,” he affirms.

Rigoberto Mena-Perez, 36, is originally from El Salvador and has already passed the GED, but admits it was a challenge. “It took me a long time because when I came here I couldn’t speak English,” he clearly articulates in his second language. The sheet metal program has also attracted him because it’s a skill he could use when he is deported back to his country of birth after fulfilling his sentence. The education program has opened his eyes to possibilities. “You can see the different jobs that are available when you have an education,” he notes.

Ed Gartside, 33, already has his high school diploma, so instead realizes part of what he can do is help others who are still working to earn their GED. Roberto Madoo-Zabala, 53, is from Venezuela, and just earned his GED for the second time. He had studied for it before he was imprisoned, but there was no documentation to verify it, so he took the course again. “It was a refresher for me after so many years,” he says.

Larry Gibson, 68, has been at MCIH for seven months, and will not be released until 2018. He is specializing in office technology, and learning various computer programs. “I enjoy this. It’s given me a chance to do things I’ve never done. It becomes an intellectual challenge.” From Indiana, his wife was a school principal and he used to work sometimes as a substitute teacher. He echoed what is practically the motto at MICH: “It’s a shame to come here and not get a degree. People need it. Education never stops.”