California Cool On The South Side Of Town 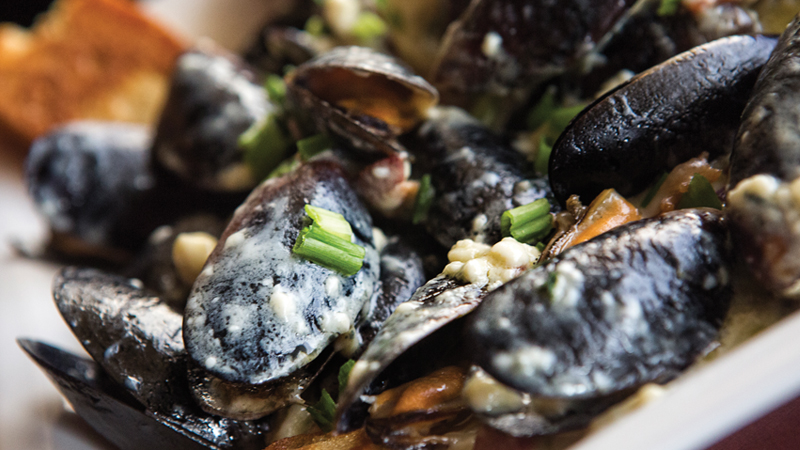 Rik’s Café fulfills a spirit of wanderlust with a deliciously eclectic menu and a cozy feel.

Rick Chalker’s “oasis at the south end of town,” as he calls it, was more than 30 years of food industry experience in the making. Born in Washington, D.C., Rick has lived in California, Florida, and Virginia, and has brought with him to Hagerstown the food influences of his past homes. He and business partner Arik Mills teamed up in 2013 to open Rik’s Café — a hidden gem that leaves its guests surprised and delighted from the time they walk in the door until they leave.

“We still get a ton of people who open our door and weren’t expecting this,” Rick says of the ambiance of the restaurant. Situated next to a liquor store in a strip mall in the South End Shopping Center, patrons of Rik’s Café are greeted with soft lighting, cozy sofas, and unique artwork and furniture. After searching high and low for a spot to open their restaurant, they decided on the south end because they wanted the opportunity to provide high end food, like their signature Bleu Sky Mussels dish, at a value price. “We pass the savings by not being at a high rent location on to our customers,” says Rick.

The pair gutted the location after they chose the site and designed the interior as a California-style “pub” where guests in shorts and T-shirts can eat next to a business person in a suit — but they didn’t want to call it a pub because that has a different meaning on the East Coast. “We’re a restaurant that serves alcohol, and not a bar that serves food, and there is a big difference,” says Rick. They built a long granite bar on one side of the restaurant and filled the space with things to make it their own. “We’ve got a mirror from the 1880s, our bartender made the bookshelves, one of our regular customers brought in the mantelpiece, and our ‘wine racks’ were used for mail at a post office in Tuscarora, Md. before we got them,” Rick says. “It’s such a mix of things that came together to make it warm and comfy.”

The restaurant, which was named by melding Rick and Arik’s first names, is the first venture for both of them that came together after the duo met working at the Longhorn Steakhouse near the Premium Outlets in Hagerstown. Arik, who has been cooking for 14 years, started out as a dishwasher when he was 15 and says it only lasted two weeks before he asked for a chance to cook. His employer at the time agreed and he started out as a sous chef using the cooking skills he had learned at home from his mother and grandmother, and paired them with his on-the-job learning of the “mother sauces” and what he calls the “finer side of cooking.”

While Rick is the front-of-the-house mastermind, balancing ambiance and service, Arik is behind the fire, cooking up unique and savory dishes that he’s developed over time. “I like to take worldwide flavors and spin them and make them my own,” Arik says. “Everything is trial and error. I’ll make something and have Rick try it and tweak it along the way.” He loves to challenge himself to make things that are as unexpected as the restaurant itself is when you walk in the door. “The day I stop learning is the day I’ll hang up a closed sign,” he proclaims. “The sky is the limit.”

Arik’s Bleu Sky Mussels were one of the many trial and error gems that he developed. The dish, featuring a full pound of mussels with a bacon and bleu cheese sauce, are a crowd favorite that he’s politely (and not-so-politely) been asked to never remove from the menu. “I’ve been threatened,” Arik jokes. “Though we change our menu from time to time, that stays on or I’d have some very unhappy customers.” Other fan favorites include the Southwestern Reuben, the Havanna burger, the shrimp tortellini, and a dessert Arik calls Xango — cheesecake wrapped in

a tortilla shell, deep-fried, and drizzled with chocolate sauce. Their specialty drink — the Rikarita — is their own take on a margarita with a sweet but tart flavor, and they have an array of craft beer on tap. For the spur-of-the-moment adventurous types who need a little help making a meal-time decision, it’s also worth noting that Rik’s posts daily lunch and dinner specials on their Facebook page, like teriyaki filet lo mein, or lamb and veal sliders.

No matter the selection, Arik says patrons can trust that every single dish will be made to order, from scratch, with no shortcuts. “I believe that if you put your love into the food, people will love you for it.” The restaurant is a dream come true for Arik to be able to share that love with others. He considers Rik’s a huge accomplishment, one that he could never have done without Rick. According to Rick, the feeling is mutual. “We connected,” says Rick. “We’re partners and friends. A few beers after work a few years ago may have led to this, and then we jumped out of a perfectly good airplane and here we are.”