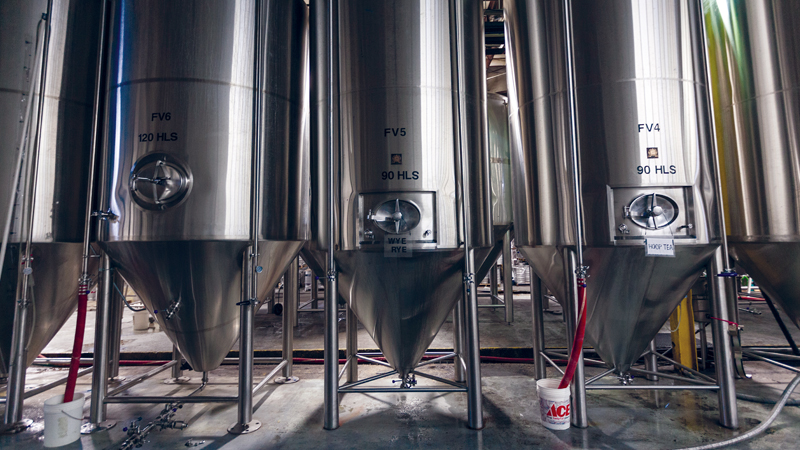 The steady expansion from pub to brewery and the addition of a retail store has led the guys behind Antietam Brewery to the natural progression of bottling their craft brews.

You don’t have to be a beer aficionado to enjoy well-crafted beer. Humanity has been enjoying the fruits of the brewing process for thousands of years. The diligent folks behind the building of the pyramids were reportedly paid in beer, which was deemed a source of nutrition, refreshment, and a reward for a hard day’s work, according to the book “A History of the World in 6 Glasses.”

It’s tough to say how agreeable a tipple of ancient Egyptian beer would be to the modern-day palate, but it’s only fair to imagine that the process has been refined a bit over the years. Fast-forward about a thousand years, and 2,000 miles northwest to Germany, and drinkers could find a brew that’s a little more relatable to modern-day brews.

In the 8th century, tribal hausfraus were brewing ale at home. By the 11th century, the professional brew monk or brew nun mostly made it in monasteries. The German Purity Law (Reinheitsgebot), which dates back to 1516, states that only three ingredients can go into beer: barley, hops, and water — a law that is still in effect today.

The brewing of beer in America dates back to Colonial days — that being said, consumption of it rose dramatically in the 19th century when thousands of Germans, wanting to escape religious and political repression, immigrated here. They brought with them the know-how and recipes for great beer.

By 1873, there were over 4,000 breweries in the United States (which is even more than are in existence today, despite the craft brew boom), which were largely owned by Germans. Familiar names like Eberhard Anheuser and Adolphus Busch, Frederick Pabst, and Frederick Miller helped lead the way for the American craft and micro-breweries in existence today. 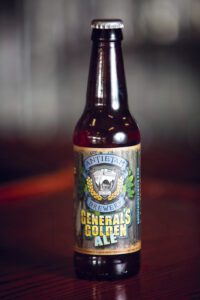 One of those small craft breweries is right here in Hagerstown — Antietam Brewery, named for the Civil War battle and for the river that runs near it. Bill Skomski Sr. opened it in October 2012 and by February was brewing beer.

Bill Sr. had a long career with a printing company in Wisconsin before moving to Martinsburg, W.Va., in 1999. After a case of corporate burnout, he bought a restaurant in Hagerstown and named it Benny’s Pub in honor of his son Benjamin who died at age 6 from leukemia.

The restaurant and brewhouse became a family business when son Billy came on board from his job as a graphic designer in Washington, D.C.

“It has always been dad’s dream to own a brewery. The pub, our craft liquor store, and the brew house are in a strip mall. People passing by are always stopping to watch the brewing process,” says Billy.

Brew Master Daniel Maerzluft — who Bill Sr. knew from a home brewers club they belonged to — has been there since the beginning. Daniel has a degree in beer technology from the prestigious Siebel Institute of Technology in Chicago. Before coming to Hagerstown, he garnered 10 years of experience in breweries in Ohio, Maryland, and Texas.

Recently the Skomski family entered into a new venture and means of expanding their distribution by bottling their beers with the help of Peabody Heights Brewery — a craft brewery and co-op in Baltimore.

When asked why they chose Peabody Heights, Billy says, “In the pub and store we sell Miller, Coors, and Budweiser. We asked our distributors and six other Maryland brewers who they used for bottling and Peabody Heights came highly recommended.” Located in the Charles Village neighborhood, Peabody Heights is a brewers cooperative. In their vast 52,000 square foot building they bottle and keg beers for nine craft brewers.

The brew master — at least in Antietam’s case — Daniel, brings the recipe to Peabody’s Brew Master Ernie Igot, who converts the measurements from Antietam’s recipes to hectare liters, allowing for much larger batches.

Peabody recently finished brewing and bottling their second batch for Antietam – Lil Ben’s Milk Stout, racking up 750 cases of 12-ounce bottles and 50 half-barrel kegs. After bottling, half goes to the pub and half goes to B.P. Lesky Distributors in Hagerstown. According to Billy, “In two years we plan on distributing in Pennsylvania.”

When asked about Antietam’s need for expansion, Billy says, “We want to have several years of bottling experience. If things go well, in four years we hope to expand the business. If we find a manufacturing facility with space for a tasting room in Hagerstown or Washington County, we would use it.”

On the battle among beer aficionados of bottle vs. keg, all Billy would say is, “Time will tell. Right now it’s fifty-fifty.”

If you’d like to weigh in on the bottle vs. fresh from the tap debate, you can try both during a visit to Benny’s Pub, and even bring some home from their sister store, Benny’s 2 Go.