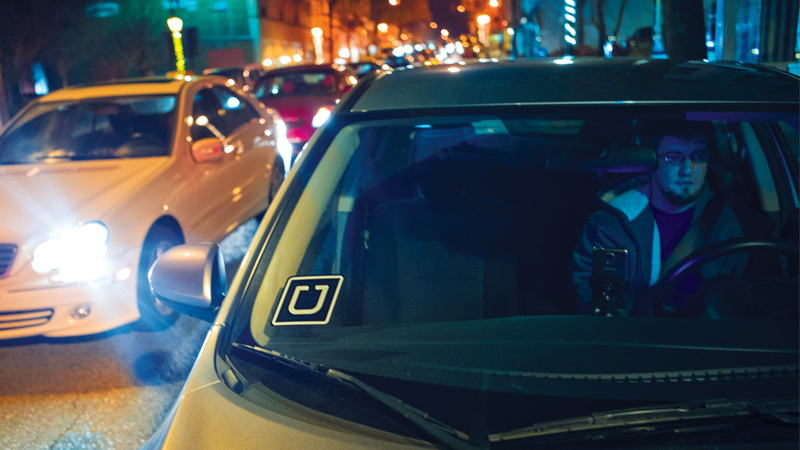 Uber, the smartphone app that connects rider with drivers, finds its place in Hagerstown.

Uber has landed in Hagerstown, connecting drivers for hire and riders. It’s done with a quick tap on a smartphone screen or a text message, then a ping telling drivers they’ve got a customer and where to pick them up.

Local driver Chris Campbell hopes to capitalize on the high-tech concept that has drawn 8 million users who have summoned over 160,000 drivers from around the world since the start-up company’s 2009 launch. The number of drivers has doubled in the past two years, according to Uber. Business has not been as explosive for Campbell, though he’s got enough customers to stay busy during nights, which works out fine to supplement his day job driving patients to and from doctor’s appointments for AAA.

As the sun goes down, he’s scooting around town, typically shuffling people to and from Cancun Cantina West or Benny’s Pub — among other night spots. “It’s a lot of people who want to drink and stay out all night, but not drive afterward,” Chris says. In his second month, he averaged $400 a week doing about 35 to 45 rides around town, intermingled with the occasional long haul job to places like Baltimore Washington International Airport. He’s cut back a bit since picking up a day job though, he says.

“Some people in Hagerstown use the old fashioned taxi service. They want to pay cash and are OK waiting. But the ones who do Uber want [a] faster [form of transportation,]” says Chris. He’s typically dropping riders off at their destination within 10 or 15 minutes from when the screen on his mobile app lights up letting him know where to find them.

Availability: The Name Of The Game 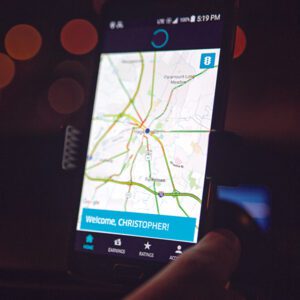 His peak hours are from after 7 p.m. until midnight, and sometimes extend to 1 or 2 a.m. “I wait for calls while I sit in my car and listen to music, or talk to my friends on Facebook,” says Chris, who adds that he likes that he can accept or decline rides to fit his schedule and that he’s essentially his own boss.

He’s working to pump business through his Hagerstown Uber Facebook page by dangling carrots like a first ride for free (up to $20) and presenting charts showing “old Uber’ rates, and “new Uber” cut fares, which start at $6.60 for an Uber X — which is a four-door sedan family car. After a certain number of miles, there is a per- mile charge that riders are made aware of before they’re even picked up.

When Chris pulls up in his silver 2013 Mazda 3, people know it’s their ride thanks to the sticker in his window. Sometimes there’s a brief, friendly exchange of words. Sometimes riders just hop in and say nothing. Chris already knows their destination, how to get there, and the estimated time of arrival — as it’s all in Uber’s GPS-driven tracking system — so strong silent types will find just as much ease of use as a Chatty Cathy.

“They get in the back seat or front, wherever they feel comfortable. Usually they just want a ride, but sometimes we talk – maybe about their day or Uber or whatever they feel like,” says Chris.

Even though he lives in Hagerstown — as do most of his riders — so far the people who have climbed into his car have all been strangers to him. He’s not at all uneasy about knowing little or nothing of them. “I’ve never had a problem. They’re making me money. I like to drive, and sometimes it turns into nice conversations if they want to talk,” he says.

His customers seem to feel just as comfortable as he does, he says. Drivers’ names pop up on the customers’ apps, along with other details telling them about the person they have just hailed a ride from. They can check out drivers’ profiles and their ratings, which are based on driving, professionalism, cleanliness of their car, and whether they offer a few accommodations such as cell phone chargers or water. There are also other customer-friendly bells and whistles — from the ability to track the car’s location, to automatic credit card billing.

The concept is taking off, claims Chris. “People who come to my Facebook business page are excited that it’s in Hagerstown now. They say it’s about time we got something new here.

I see Uber within a year or so popping up all around Hagerstown.” Already it’s picked up since Chris started in June. “Drivers are staying online more; I can see this on the app — this means they are on the road and making money.”

A report released by Uber this past January showed drivers make about $17 an hour in Washington, D.C., and as much as $30 an hour in New York. Those working the largest markets average about $6 an hour more than local taxi drivers, though the downfall is Uber drivers pay for gas, car insurance, and vehicle maintenance.

Those in need of a little pick-me-up can sign up directly at www.get.uber.com, or download the app directly to their iPhone or Android smartphones via iTunes and Google Play stores respectively.